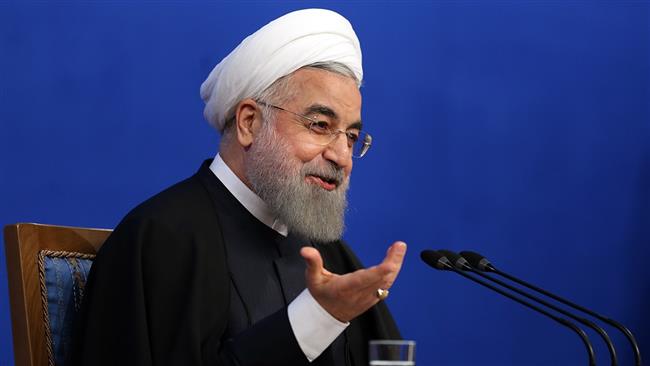 President Rouhani made the remark in the capital, Tehran, on Sunday, addressing Iranian and foreign reporters in a presser.

On the election day, the Iranians once again “showed their trust in their establishment, their leadership, and their administration and went to the polls and once again amazed the world,” President Rouhani said.

Iran held its 10th parliamentary and 5th Assembly of Experts elections on February 26 with an overall turnout of 62 percent nationwide. At least 33 million out of the 55 million eligible voters took part in the polls.

The government made efforts to hold “legal, free and fair” elections, and did its utmost to “return hope to the society,” he noted.

He said whatever action was taken concerning the elections, including the rejection of some of the hopefuls’ eligibility to run in the polls, “was within framework of the law and this means political maturity.”

“Among all the factions, parties, and groupings, it was mostly moderates who were chosen and this means that our people have opted for moderation,” the Iranian president said of the results of the elections.

After the introductory remarks by President Rouhani, the floor was turned to the reporters.

One reporter asked how the country was availing itself of the opportunities provided following the removal in January of the nuclear-related sanctions against the country.

President Rouhani said the Islamic Republic has increased its oil output to 1.4 million barrels per day following the removal of the bans, adding, “We’ll be selling two billion barrels of oil per day next year.”

A little bit of lingering fear

Asked whether the other side to the July 2015 deal that enabled the lifting of the sanctions has been completely fulfilling its commitments, the Iranian president acknowledged that “some private institutions, some banks, [for instance] a bank that has already been fined for working with Iran, they are still a little bit afraid” of renewing business with Iran.

He, however, said this does not mean that the agreement has not led to renewed international banking and insurance cooperation with Iran.

The agreement, he said, has led to the cost of the foreign exchange flow needed for production and export to decrease by 10 percent and the cost of maritime transportation to drop by 25 percent.

Amid the West’s criticism of Iran’s provision of humanitarian aid for Yemen and its silence on Saudi Arabia’s unabated bombing of the impoverished nation, Rouhani said, “Iran’s altruistic assistance to Yemen is to continue and will not be disrupted… The Saudi government unfortunately continues its ruthless bombing, and great powers do not pay attention to this issue.”