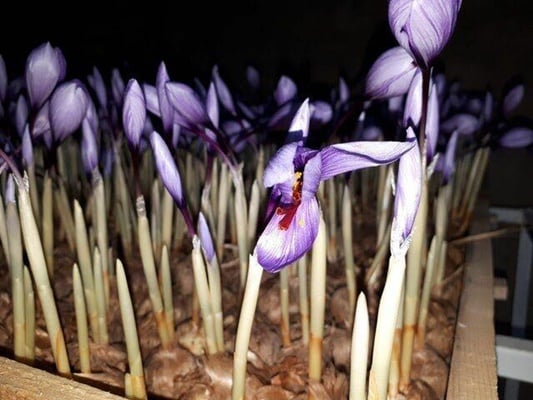 A young Iranian man from the city of Maku in West Azarbaijan province has succeeded in creating planting conditions similar to Mars in order to cultivate saffron without using soil. He has spent only $ 500 USD to work on this initiative.

In an interview with ISNA Ali Golabi said he has always been concerned about the creation of a new job for the unemployed.

“Since late last year, I was looking for running a greenhouse with a hydroponic method (soilless), and after doing the research, I decided to use the opportunities available. Therefore, I began to cultivate saffron at a corner of my house.

According to him, he has brought the bulbs of the saffron from the city of Mashhad to grow them in his three-metre handmade containers at the corner of his yard.

The quality of the product is perfect, and the reason is that the plants are away from direct sunlight. In this new method, moisture is collected from the lower and upper parts, and saffron is cultivated in 5 months. It is expected that he would harvest more than 100 grams of saffron at his first attempt.

Soilless culture began centuries ago, when in ancient times, Egyptian, Chinese and Indian farmers used a manure in water to cultivate cucumber, watermelon and other vegetables on the sandy riverbeds. There are now many farms that cultivate different plants through soilless culture. Soilless culture is a type of cultivation in which soil is not used as a bed.