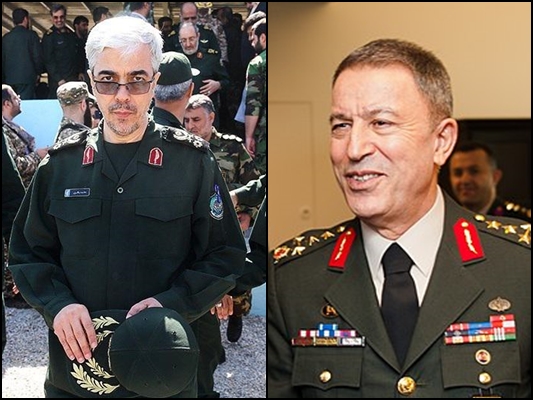 Turkey's Military Chief of Staff General Hulusi Akar is in Tehran for talks with Iran's top military and political officials, expected to tackle border security and counter-terrorism along with regional issues.

Akar arrived in Tehran late Sunday on the invitation of his Iranian counterpart Major General Mohammad Baqeri who visited Ankara in mid-August, the first by an Iranian chief of staff since the 1979 Islamic Revolution.

The first round of talks between the two military chiefs began on Monday after an official welcoming ceremony held in Akar’s honor in Tehran.

The situation in the region, especially in Syria, countering terrorism, border security and the controversial referendum held in the Iraqi Kurdistan last week are anticipated to be the topics for discussion, the Fars news agency reported.

The two sides are also expected to discuss the implementation of mutual agreements signed in the Turkish capital.

Turkey and Iran are not on the same page over conflicts in Iraq and Syria but the changing dynamics on the ground in recent months have prompted Ankara to inch closer to Russia and the Islamic Republic.

“Iran is becoming a very important actor in the region, particularly in Iraq and Syria,” former Turkish ambassador to Iraq Unal Cevikoz, who now heads the Ankara Policy Forum, told the Voice of America in August.

Ankara is becoming increasingly wary of US and Israeli plans in the region, including their covert support for the establishment of independent Kurdish satellites in Syria and Iraq.

A referendum held in the Iraqi Kurdistan last Monday on possible secession has outraged Turkish leaders who have threatened a military intervention if the campaign does not stop there.

Turkish President Recep Tayyip Erdogan said Sunday he will travel to Tehran on October 4 to discuss the referendum and the Astana talks on Syria with President Rouhani and Leader of the Islamic Revolution Ayatollah Seyyed Ali Khamenei.

Erdogan said the roadmap that Turkey and Iran will follow in response to the controversial referendum and other regional developments will take shape after his visit.

Iraq’s central government has said it will seek the assistance of Iran and Turkey to secure its borders after local Kurdistan authorities refused to cede the control of border crossings and airports to Baghdad.

The Iraqi military held a joint drill with Turkish troops on their borders last week and similar exercises are in the works with Iran.