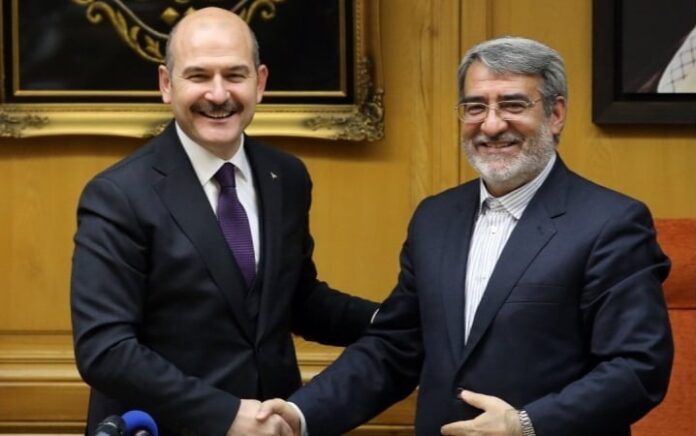 Iranian and Turkish Interior Ministers, in a meeting in Ankara, have called for joint fight against drug trafficking, human trafficking, terrorism and illegal immigration.

During the Thursday talks, Iran’s Abdolreza Rahmani Fazli hailed the current level of cooperation between the two countries on border security, fight against drug trafficking, countering human trafficking and smuggling of goods as well as fight against terrorism.

Good cooperation between Iran and Turkey has been established in accordance with mutual agreements, while bilateral cooperation in this area is still developing, noted Rahmanii Fazli, who has travelled to Ankara on a one-day visit upon the invitation of his Turkish counterpart.

He also stated the Iranian authorities are pursuing issues related to bilateral cooperation very seriously, and that the Iranian government, the nation and the Leader of Islamic Revolution pay close attention to ties with Ankara.

He described the development of bilateral relations as a priority for both countries and praised Turkey’s good cooperation with Iran, saying good meetings between officials and experts on both sides have been held, and this cooperation will continue.

The Iranian Interior Minister went on to say that “we must strive to strengthen economic cooperation, tourism, and trade between the two countries, apart from these partnerships.”

He described the level of Iran-Turkey relations as suitable, adding that through the contacts and meetings of the two presidents and the will of the two sides, the level of relations in these sectors is also desirable and expanding.

“The two presidents met seven times last year within the framework of bilateral or multilateral meetings, and this, in addition to cooperation in other areas, shows that the ties between Tehran and Ankara are at the highest level.”

We are keen to negotiate about regional affairs and to strengthen our bilateral relations and cooperation, as well as security arrangements for development, underpinned Rahmani Fazli.

“We believe Turkey is an effective country in this regard, and we hope this meeting would improve the relations between the two countries,” the Iranian Interior Minister said, adding that regional issues should be solved by the regional countries themselves.

For his part, Turkish Interior Minister Süleyman Soylu said some joint steps have been taken in Iran-Turkey relations with joint responsibility and they have resulted in good achievements for both sides.

“Iran-Turkey relations have reached a very good level in terms of ties between the two interior ministry officials as well as in the police and security fields, cooperation in the field of refugees and joint security meetings in the past one and a half years,” he pointed out.

Soylu further mentioned that both countries focus on joint struggle against terrorism, drug trafficking, illegal immigration and smuggling of goods and border security.

Referring to his last year’s visit to Tehran, he said, “After that trip, the Turkish and Iranian Ministry delegations negotiated and examined cooperation issues in those areas.”

The Turkish official highlighted that his last year’s trip made it possible to improve the mutual relations, and fortunately Tehran and Ankara have achieved this goal by conducting talks since then.

Rahmani Fazli earlier took part in a joint meeting of the experts of the Interior Ministry of Iran and Turkey which was also attended by his Turkish counterpart.