Iranian survival does not hinge on a deal with the West 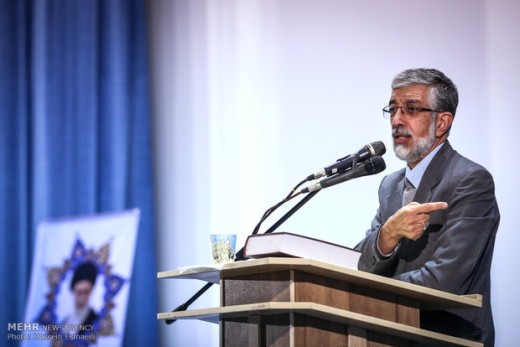 Gholamali Haddad Adel says the Iranian survival does not hinge on a deal with the West and unity holds the key to principlist success.

The head of the Principlist Caucus at the Islamic Consultative Assembly has said there are some people who tie our welfare and life and death to the outcome of nuclear talks with P5+1. “We need to act carefully not to fall into such traps.”

According to Mehr News Agency, Gholamali Haddad Adel, made the comment at a sixth congress of the Society of the Devotees of the Islamic Revolution [a principlist faction that supports former president Mahmoud Ahmadinejad. It follows the same line as the Stability Front and other radical principlists who are critical of the government of President Rouhani. They seriously doubt the efficacy of the moderate policies of the 11th government on the international stage and challenge the usefulness of nuclear talks. The principlist faction, which is bracing itself for parliamentary elections of early 2016, has always reiterated that the US administration and its allies are not trustworthy]. The following is the translation of what else the former parliament speaker told the gathering:

The epic of December 30, 2009 [which saw a massive turnout of the public in support of the establishment and spelled an end to unrest that followed the presidential elections earlier in the year] was a shot across the bows of foreigners and political activists. On that day, people officially told political activists that the Iranians were steadfast on their path and that activists should not lead the nation astray through divisions and disagreements.

The Islamic Revolution is now 36 years old. Over the past 36 years we have gained a lot of experience. Our enemies have acquired experience too. What is important here is that prior to the victory of the Islamic Revolution the enemies did not know what Shiism stood for. Over this period we have organized scores of gatherings to promote the intellectual basis of our revolution.

Today many books on Ashura [a Shiite religious observance commemorating the uprising Prophet Muhammad’s grandson led against injustice], Karbala [the place where Imam Hussein fought an unequal battle against the oppressors of his time], and Shiism have been written in American universities. For instance, a Jewish woman has written a book on the uprising of Karbala. That means they have developed a better insight into Shiism and our Islamic Revolution.

Having failed in the war waged against us [through Saddam’s Iraq in the 1980s] and then in creating political groupings [seeking to overthrow the establishment], our enemies are now focusing their attention on economic pressures against the Islamic Republic. That does not, however, mean that our enemies have lost their hope in the cultural onslaught. Exerting economic pressures on us lies at the center of their efforts to counter our revolution today.

The enemy is involved in a war of nerves, trying to make our people believe that their survival hinges on a deal with the Americans and the West and that any change in the sanctions regime depends on conclusion of an agreement with them.

Two or three years ago, some local media and satellite channels acted as if our welfare and life and death hinged on the outcome of [nuclear] talks [with P5+1]. We need to act carefully not to fall into such traps.

[During the 2013 presidential elections] Contenders in their electoral campaign focused on pocketbook issues, each trying to cast himself as the one who could settle the economic problems of the nation. That is exactly what the enemy wants us to do.

Early on in the revolution when we cut our ties with the United States, Imam [Khomeini] said that relations with the US would not serve our interests. But on the campaign trail, that was not what the candidates were taking account of.

A recent drop in oil prices shows that even if we clinch a nuclear deal and all sanctions are removed, the crude prices are so low that the enemy can still deal an economic blow to us. The enemy seeks to instill into our society the belief that our economic conditions would improve only through compromises with the US. They want to influence our local policy and elections through manipulating the public opinion.

The pressures our enemies have brought to bear over the recent years show that new areas have been activated on the economic front.

Iran is so powerful today that over 1.5 million Iranians joined their Iraqi brethren across the border for Arba’een ceremonies. Thanks to the same authority, the support Iran lent to the Syrian government prevented its collapse.

The integrity of the Islamic Revolution, the late Imam and the Supreme Leader hold the key to Iranian authority.

Over the past couple of years, some Palestinian combatants have done and said annoying things, still the Supreme Leader has underlined assistance to Palestinian movements citing the fact that such assistance is a principle of our revolution regardless of the stance of one group here or another there. It was because of the wisdom of the leader that during the Gaza War, Palestinian fighters said that they would have been annihilated had it not been for the assistance of Iran.

Honesty is vital to authority. In order for such authority to be effective, we should allow spiritual powers to prevail. What can pave the way for Iranian progress in the world is a pattern which is based on neither colonialism nor hegemony. We are now involved in a serious struggle which is economic in nature. We need to be mindful of the fact that the enemy is using the weapon of economic pressures to divide us and lead our revolution astray. What is important in countering this ploy is unity.

I don’t want to talk about what transpired in the principlist camp in the previous election and open this old wound. Whenever we have joined forces we have emerged victorious and whenever we have been divided we have suffered a defeat. Remember the seventh parliament?

Our rivals have savored the sweet taste of victory thanks to unity. Have we experienced the bitter taste of division? Shouldn’t we draw a lesson from our past experience?

What is important is to have a principlist-majority parliament. We need to take measures that are in line with the instructions of the leader. Who is elected is not important. Principlists should have as many seats in parliament as they can. We should not keep silent when the leader is insulted simply because such silence serves our personal interests. What is important is to protect the revolution.

I am not a member of any party or political grouping, but I like all members of the principlist parties. That individual principlists are not elected is not important, what is important is that parliament should be in the hands of principlists so that we can act better in the future.

The rallies held on Arba’een this year told the world that we follow the same path of Imam Hussein and stick to his motto of never bowing to humiliation. The rally was very important. In fact that rally and the epic of December 30 were different manifestations of a single reality.

Some newspapers failed to put the news of Arba’een rallies on their front pages apparently because they were not newsworthy enough to them. Why didn’t they cover this gigantic event? We need to act more carefully not to allow our revolution to fall into their hands.