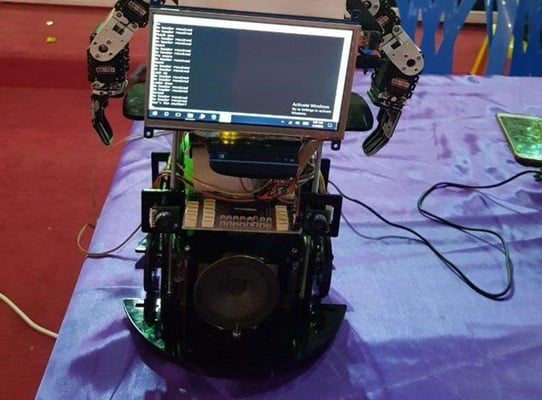 A group of Iranian researchers have designed and developed interactive robots which help students learn the English language.

Mina Raeisi, one of the researchers involved in the project says the plan is aimed at teaching the English language using robots.

“In this plan, the robot functions as an assistant teacher, and, accordingly, we have executed all interactive programs on it.”

The robot is an interactive one, she told the Persian-language Iranian Students’ News Agency (ISNA).

“The robot is programmed to be able to take questions and give answers. Language learners are to give answers based on the questions that the robot asks them. When the answer is given, the learner’s name will be stored in the robot and he/she will score points,” said the researcher.

She said the robots only save the positive points that learners score based on which they will be evaluated.

“Based on the scores received, the learner is allowed to play computer games. The game includes information about the learner’s language learning. The information is taught to learners through games,” the researchers said.

She said the results of the tests conducted showed that learners were under less stress when speaking English. Moreover, said Raeisi, learners were more active in class.

“Since the robots make traditional methods redundant, the class is livelier, and we predict that each individual should have a robot of his/her own to be able to learn the language,” said the researcher.

One of the capabilities of the robot is that it can be connected to the Internet, she said.

“In some cases, this robot does not know the answers to the questions asked; so, it can get connected to the web to search for the information it needs on Google, and finally give the information to language learners,” she noted.

She then touched upon the way that the robots interact with humans.

“The robot is programmmed in English and will not answer the questions asked in Persian. Moreover, it corrects learners. If they make an error in their speech, the robots will correct it,” she said.

The researcher said the most difficult stage in teaching a language is the “speaking” skill, and added, “This robot gives learners the courage to speak.”

Among other features of the robot is that it is capable of offering information in areas other than language teaching.

“This robot, for instance, can announce to users the weather forecast and temperatures through the Google app,” she said.

The project has been completed by Mina Raeisi, Maryam Raeisi and Hadi Salehi at Isfahan University.