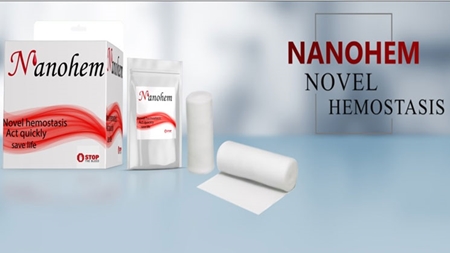 A group of Iranian researchers have developed environmentally-friendly nano-dressing for wounds.

The nanogauze is capable of staunching the flow of blood as well.

Products which can make bleeding stop are among the medical supplies high in demand, and they have secured a considerable market share in Iran.

The market is the target of many foreign commercial firms, too.

While only a limited number of domestic producers are active in this domain, a team of researchers have recently managed to produce a new type of wound dressing (Nanohem) based on nanotechnology.

“The nanogauze is a product capable of stemming the flow of blood,” said Tayyebeh Zahrabi, the manager of the research team.

“Peptide nanofibers have been used for the first time in producing this dressing which can effectively stop bleeding,” she noted.

“This has resulted in the production of a haemostatic product which is environmentally friendly,” she said.

“This product is used as a haemostatic material by surgeons and orthopedic doctors. It can also be used by doctors and personnel at medical emergency centres, emergency wards at hospitals and state-run centres such as [clinics of] the Red Crescent and the Armed Forces,” she added.

Zahrabi noted that product can also be used as part of a first aid kit by the general public.

In severe blooding, she said, conventional types of gauze and dressing are usually put on the wound with “pressure” to stem the flow of blood. However, she added, the newly developed nanogauze can be used with “minimum pressure” on the wound to make bleeding stop.

She said the nanogauze is an ideal product for haemophilic patients as blood fails to coagulate in their bodies when they get a wound or cut in their skin.

“There are around 12,000 haemophilic patients in Iran,” she said.

She added the product has a quality similar to that of foreign products, but has a lower price.

She said the nanogauze has the potential to be exported, which could boost national forex income.