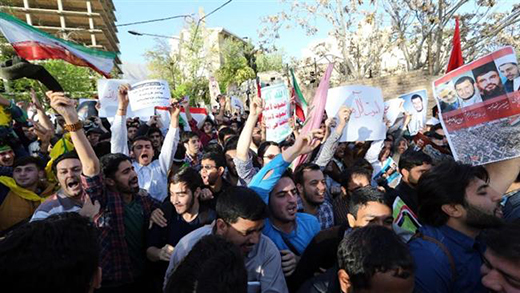 In protest against Saudi airstrikes in Yemen and sexual harassment of two Iranian teens at the Jeddah airport, demonstrators called on officials to shut down the Saudi embassy.

Iranians have staged a protest rally outside the Saudi Embassy in Tehran, denouncing the kingdom’s airstrikes on Yemen as well as the sexual abuse of two Iranian teenagers by Saudi officers at the Jeddah airport.

During the Monday demo, a large group of angry demonstrators also shouted slogans against the Saudi royal family, the US, and Israel.

“We are here to show that we will defend an oppressed nation anywhere in the world. Such military aggression irrespective of its objectives is a blow to the Muslim Ummah (community) and benefits the Zionist regime of Israel and major powers. The aggressive countries must explain why they are using their facilities to attack a Muslim state,” a protester told a Press TV correspondent in Tehran.

Yemeni nationals and students living in Tehran also took part in the rally. The protesters called on Iranian officials to immediately shut down the Saudi embassy.