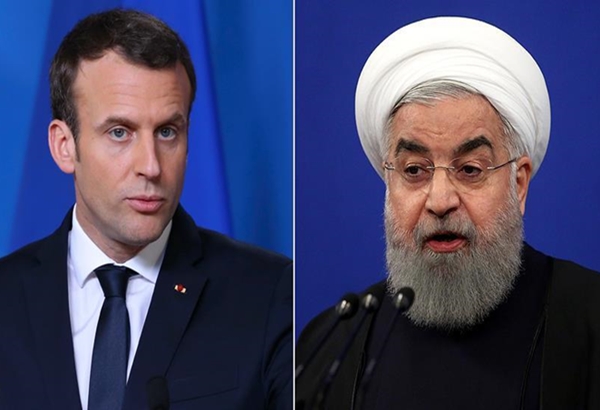 President of the Islamic Republic of Iran Hassan Rouhani has highlighted the vital role that late Iranian commander General Qassem Soleimani played in ensuring regional security and battling against terrorism, saying the European people would have faced major threats without his efforts.

In a telephone conversation with his French counterpart Emmanuel Macron on Tuesday evening, President Rouhani said the Iranian nation is very grieved at the US crime and the loss of General Soleimani, noting that Americans made a “grave strategic mistake” by assassinating the Iranian commander.

He also expressed hope that all countries favoring peace and sustainable security in the world would adopt decisive stances against such criminal and terrorist action by the US.

The US will not achieve its objectives by taking this terrorist measure and its plot will backfire, President Rouhani added, noting that such American crime has strengthened unity and solidarity between the Iranian and Iraqi nations.

The late Iranian commander had traveled to Baghdad at the invitation of the Iraqi government for a meeting with the Arab country’s prime minister, President Rouhani added, stressing, “The US move was in violation of Iraq’s sovereignty, was an insult to that country’s government and nation, and was a serious and unforgivable crime against the Iranian nation.”

“The US government is held accountable for the consequences of such act of assassination,” the Iranian president told his French counterpart.

President Rouhani further pointed to the anger and sympathy that the US assassination of General Soleimani has prompted in the Muslim world and even in a number of the European cities, adding, “The Americans must know that their security and interests across the region are faced with dangerous conditions today, and they could not be immune from the consequences of this serious crime.”

Touching on the Iraqi parliament’s resolution on the expulsion of US forces from the Arab country following the assassination of General Soleimani, President Rouhani said, “We believe that regional security would be ensured by the regional countries alone. Nobody would benefit from tensions in the region, and instability in this region could be dangerous for the entire world.”

“The Islamic Republic of Iran never seeks war and insecurity in the region, but does not hesitate to defend its rights and sovereignty either,” the Iranian president underscored.

Highlighting the Iranian nation’s resistance to foreign pressures over the past 20 months, he added, “During this period, Iran has remained committed to its (JCPOA) undertakings, and what has been done in the recent five steps has been within the framework of the JCPOA. But the other side has not fulfilled its commitments which has created imbalance in the JCPOA.”

The president finally reiterated that Iran’s steps in reducing the JCPOA commitments could be reversed as soon as the other parties honor their commitments.

For his part, Macron said he understood the “bitter and saddening” conditions in which he was talking to the Iranian president, adding, “We are all very worried about peace and stability in the region, and the incidents that have taken place could cause increased tensions and irremediable convulsions.”

Highlighting the significance of the JCPOA, Macron said France will continue efforts to save such major international agreement and expects Iran to do so as well.