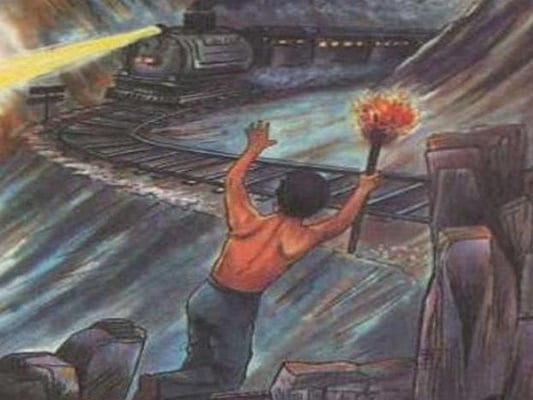 A 61-year-old Iranian peasant has managed to save the lives of dozens of passengers travelling from the northwestern Iranian city of Tabriz to the capital, Tehran.

Less than 6 months have passed since the death of Iranian hero Rizali Khajavai, the Iranian peasant who sacrificed his life to save the passengers of a train decades ago.

Now, history has repeated itself. A 61-year-old Iranian peasant has sacrificed his life to save dozens of passengers travelling from Tabriz to Tehran.

Hossein Alimardani found out the soil under the railway line had caved in after a heavy flood, which meant a disaster could happen if the train ran over it. So, he decided to save the passengers’ lives, one way or another.

It was morning, May 15, 2018. Spring rain had refreshed the city. Like other days, Alimardani got into his KIA Pride (one of the most affordable automobiles in Iran) to go to his agricultural fields. The fields are located 36 kilometres from the city of Zanjan. He earns a living for his family of 7 by working on the fields.

The road leading to his agricultural fields lies next to the railway line.

“I hadn’t arrived at my fields, yet, when I realized the soil under the track had collapsed and had been washed away onto the road. … The soil under the railway line had cave in almost 15 metres deep,” he said.

“I had no doubt that if the train passed over it, the track couldn’t withstand [the weight of the train] and a disaster would be inevitable,” he said in an interview with Hamshahri newspaper. 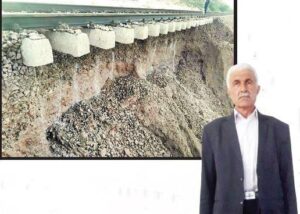 He called emergency police, but there was no answer. He could not reach emergency teams, either. Finally, he climbed a height and saw a train coming. He decided to make the train driver realize what had happened. He found an old red banner lying somewhere nearby, grabbed it, and began to run on the track toward the train. The locomotive driver found out that something must have happened, and put on the brakes. The train stopped just 20 metres from the place where soil had collapsed. And officials on the train thanked him for saving the passengers’ lives.

It was not the first time Alimardani sacrificed his life. Years ago when he was young, he saved two people from drowning in a canal.

Alimardani’s story is reminiscent of the deceased Iranian hero Rizali Khajavi, who died of kidney failure and respiratory disease months ago at the age of 86. Back in the early 1960s, Rizali saved the lives of passengers on a train on a cold night. Rockfalls had blocked the track; so, he picked a lantern and began waving it to the train driver, who finally saw the dim light and stopped the train in time to avoid a disaster.

Rizali’s heroic move has long been an important part of school books in Iran, teaching the students the lesson of bravery and sacrifice.