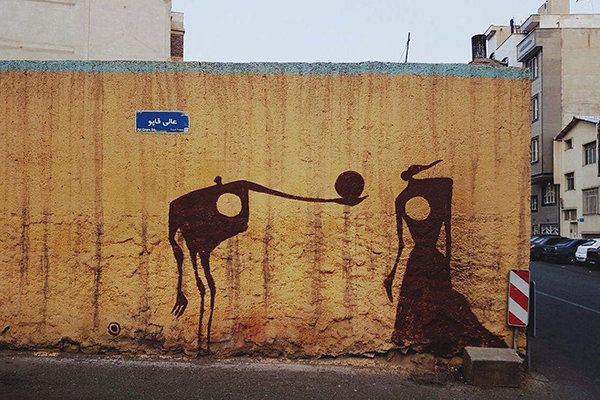 A little known Iranian painter is trying to illustrate the loneliness of man in his single-colour wall paintings.

Mirza is an artist who has drawn paintings in ochre on walls everywhere, from old neighbourhoods in Tehran to abandoned dilapidated buildings in Damascus. There is no name or photo of him; it is only his paintings that one can see. Even in videos, he covers his face. The following report elaborates on his paintings. 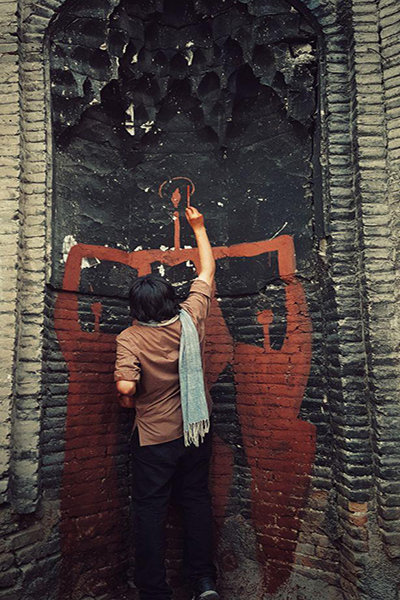 We Have Forgotten to Marvel in Life

Mirza’s paintings all have the same colour, a type of red which he himself calls “the colour ochre.” Anyway, primitive man had the ochre earth and the wall. It seems the impression left behind by the paintings of primitive man has become stronger and more mysterious throug years. Mirza, too, has the same simple tools: the ochre earth, which still hasn’t run out and still exists on the Planet Earth, and the wall which exists in much higher numbers today than in the era of primitive man.

I object to man’s not marveling in life!

Murals and paintings on walls suggest a kind of protest all over the world. In many countries, political, social and civil protest is expressed in this way. But Mirza has a different look. Of course, he has objections, too, but his protest is of a different kind. His grievances go beyond political and social objections. Such objections have an expiration date as they get old and invalid, but how is it that the secret shared by primitive man through their wall paintings are still new? These paintings are an objection to man’s not marveling, and objections addressing man, not politics or ruling systems. 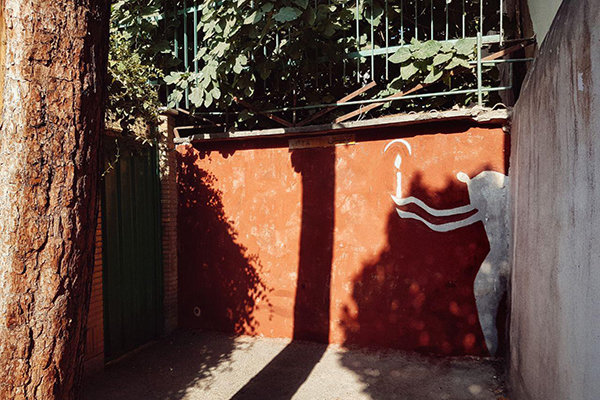 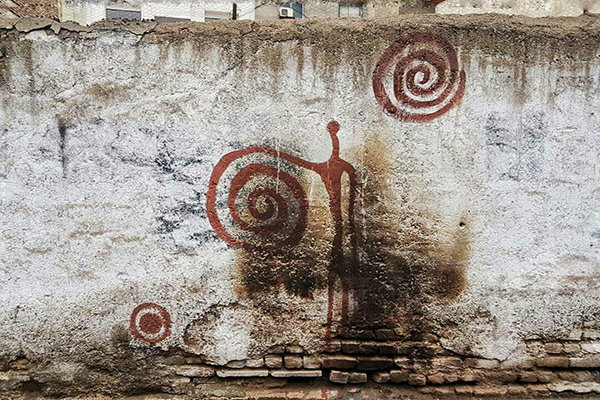 Mirza has organized different exhibits, but all of them have been held across the cities, no at galleries where such exhibitions are normally held. He had his first exhibition experience on a street called Arbab-e-Jamshid. His first audience were the rough sleepers on that street, who expressed their views on his artworks and slept next to them. The Arbabe-e-Jamshid street is located in downtown Tehran in a neighbouhood where the sound of water running through street canals can be heard and everything is extremely serene; an old traditional neighbourhood.

Some of our compatriots would sleep under one of his paintings drawn on a column. Once I asked one of them what the story behind the paintings on the street were.

“I think they were drawn by aliens because all of them bear the same sign: a circle with a point inside,” he answered. 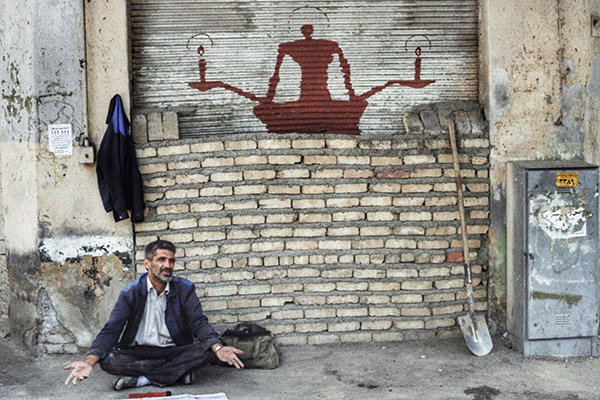 War has left behind a trail of destruction. The ravages of war are seen across Damascus as if there is no end to them. However, man will keep making discoveries. Amid the destroyed buildings, Mirza is looking for what human spirit has lost. Being alone is very important to him. Being alone mostly takes the form of loneliness rather than isolation. In his viewpoint, loneliness is the most basic human feeling. Individual loneliness could be seen in his early works: lonely animals, lonely people, separate from one another. But Later, Mirza went for collective loneliness also referred to as public loneliness. The more the number of lonely individuals, the more pure the loneliness is. A clear example of collective loneliness can be seen in the Middle East, he believes. It is a kind of loneliness which can specify the status of man on earth. But such an ambience is hidden in a modern style of living and is hard to notice. So, in his paintings, Mirza mostly highlights collective loneliness. He suggests that we, like all humans, are lonely, regardless of whether or not there is war, and may be that is the only way to salvation.