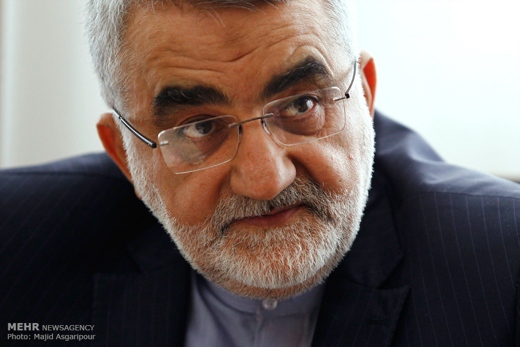 An Iranian MP says that a parliamentary bill on safeguarding Iran’s nuclear achievements and rights can help the negotiating team and will not tie their hands.

The chairman of parliament’s National Security and Foreign Policy Committee says that under the bill the chamber passed on safeguarding the country’s nuclear achievements, the results of nuclear talks should secure parliament’s approval.

Alaeddin Boroujerdi said this to reporters on the sidelines of a parliamentary session on Tuesday and added that the government’s representative at the session was expected to rally behind the parliamentary bill. The following is the translation of what else the MP said as reported by Mehr News Agency:

He said the bill, which requires government to protect the country’s nuclear rights and achievements, lends fresh support to nuclear talks, adding the Supreme National Security Council has [set and] communicated the red lines to the nuclear negotiating team and they are obliged to respect the red lines.

Today parliament came to the aid of the negotiating team so that the other side can understand that Iran attaches great significance to the case, he said.

As for speculations that a bill put forward by the Supreme National Security Council would tie the hands of negotiators, Boroujerdi said that the bill underwent some modifications so that it does not tie their hands.

The question [approval of the result of the talks] has been envisioned in the Constitution’s Article 77 [International treaties, protocols, contracts, and agreements must be approved by the Islamic Consultative Assembly] and Article 125 [The President or his legal representative has the authority to sign treaties, protocols, contracts, and agreements concluded by the Iranian government with other governments, as well as agreements pertaining to international organizations, after obtaining the approval of the Islamic Consultative Assembly], he said.

The constitutional articles were not directly mentioned in the bill since they are clear, he said, adding that a mention of these two articles would mean that the results of the talks should be debated on the floor.

The MP further said that in addition to parliament’s approval, two constitutional articles were also included in the bill, adding it was a move to highlight the need for the implementation of the Constitution.

“The government’s representative did not comment in the session. I think a number of MPs had some views to share with the chamber, but they accepted not to make comments since we were supposed to speak with one voice,” Boroujerdi said, adding the Cabinet’s envoy too should have come on board.

Asked about the strident tone in the parliament speaker’s voice, Boroujerdi said that the top MP asked fellow deputies not to make comments and show solidarity – although it is part of their legal rights to express their views in parliament, adding the government’s representative too should have followed suit [by making no remarks on the bill].