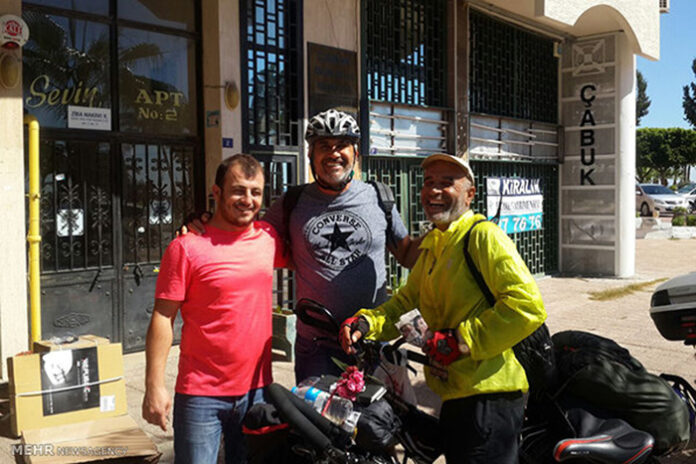 A 62-year-old Iranian man has started travelling around the world using his bicycle.

In the seventh decade of his life, Hamidreza Mir-Saeed Qazi, a retired military member, has decided to change his lifestyle: he tried to become a vegetarian, did more exercise, improved his language skills, and started to collect what is necessary for a globetrotter cyclist! 10 years ago, he started to overcome all barriers to his adventure around the world.

According to a Farsi report by Mehr, Mir-Saeed Qazi served for Iranian military for 27 years; has worked as a ceramic artist who printed the faces of martyrs and celebrities on tiles; and now, he is spending his 60s riding bike in the nature.

In the age of technology, when the cyberspace has dominated the lives of many, this 62-year-old man put all he had in a backpack and travelled to far lands by bike.

His first destination was Turkey, so he began to learn the language of this country. He pedalled for about 1600km across Turkey and Cyprus for two and a half months. Mir-Saeed Qazi plans to write a book about travelling at low cost.

“I am an energetic man, and doing sport is the best way to use your energy. Because of my good physical conditions at this age, I wanted to do something not everyone does; so I chose travelling by bike.” 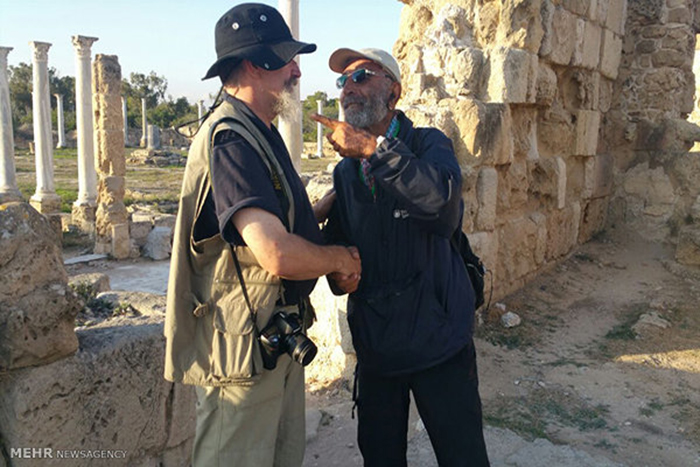 “Strongly inspired by Paulo Coelho’s ‘The Alchemist’, I started to prepare for my journey 10 years ago. Coelho writes in this book that God didn’t create us by tossing a coin: he has assigned us a definite goal. I looked at myself, and realized that being healthy at an old age was an opportunity to pass a massage to the people of world.”

“When you are 60-year-old and do something generally done by young people, you offer hope to others. There are very few people who cycle around the world at my age. Plus, most cyclists are financially supported by federations, societies or governments to carry the flag of their country around the world as a messenger. I had no support, so I tried to keep my expenses at minimum.”

Cycling is an expensive activity

“A few years ago I met two young Belgian cyclists in the road of Semnan [central Iran] and invited them to my house. When they saw my equipment they wondered how I was able to travel around the world with them!”

“Despite what it seems, cycling around the world is an expensive activity. I made a living out of my pension and didn’t have much money, so I bought the needed equipment over time. I tried to get what was necessary so that I wouldn’t need to ask for the help of others in the road. I carried the flag of my country; it was a matter of pride for me.” 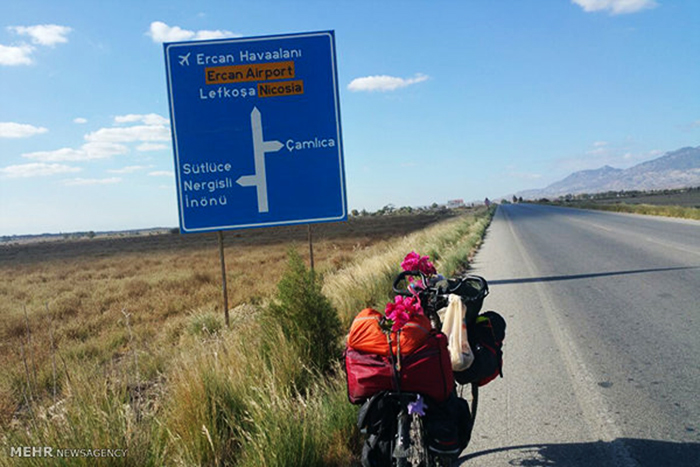 “In Turkey I drew the attention of people because of my old age. Plus, I had two placards. On one of them, I had written “Replace tobacco with sports”. I stood in the squares with the placard in my hand. Turkish press said that by carrying banners beside a backpack, I acted like in comic strips and caught people’s attention. They had called me ‘the laughing man’.” 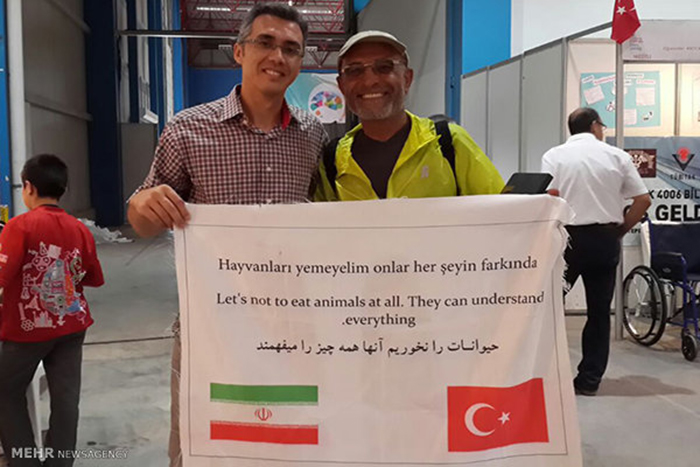 “Early in my path, I had to ride for 50km. I got lost and ran out of water. I stood by the roadside with my water bottle upside-down in the hand. Finally a truck stopped to help me and I learned that the driver was Iranian. This happened again a month later; this time I waited four hours for the help until another Iranian truck driver gave me some water one thousand kilometres away from Iran! Foreigners have reason to say that Iranian people are kind.” 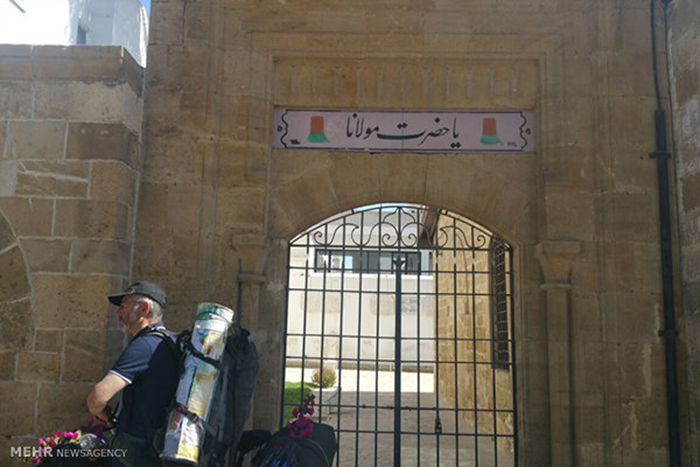 Five hot meals in two and a half months

“I tried not to take food from other people. A cyclist can’t carry fireplace and cookware, so I ate only about five hot meals during my journey. I drank very little tea. My main food included bread, dates, olives and sesame. At the end of the day, it was in my favour because I felt so heavy if I would eat hot food every day, and I couldn’t keep on pedalling. Despite all obligations, everything ended well: I kept my body in good shape, improved my language skills and enjoyed beautiful landscapes I couldn’t see if travelled by car.”

“Cycling is risky, especially when you carry a 40kg backpack in crowded roads. Sometimes trailers passed by me very closely to pull a stunt, causing small whirlwinds which could be deadly. When you pedal downhill, you must be careful because the bike speeds up and a clod under your wheels can make you fall.”

“I slept in a tent, and some nights I was tired of Mediterranean rains … I was wounded once, and I had to pay $300 for three stitches.” 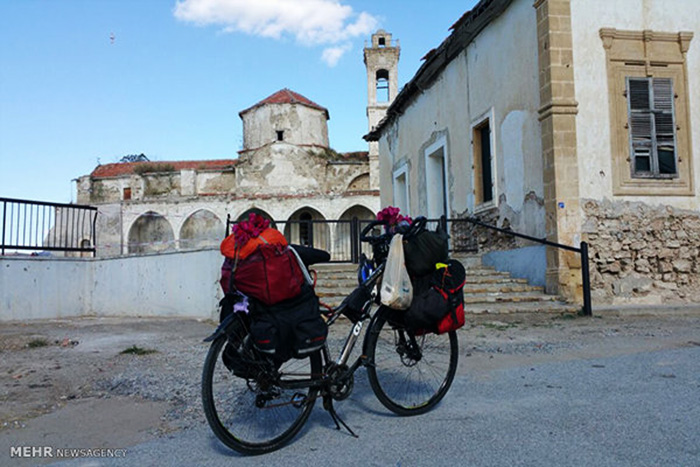 Mir-Saeed Qazi is resolved to continue his travels. This time he is going to Africa, Senegal:

“I have been preparing very well for my journey to Turkey. Now I have gone to a village near Damghan [central Iran] to do exercise in fresh air in order to prepare for my next journey. With no financial support, I have to progress slowly and remain hopeful.” 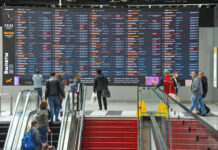