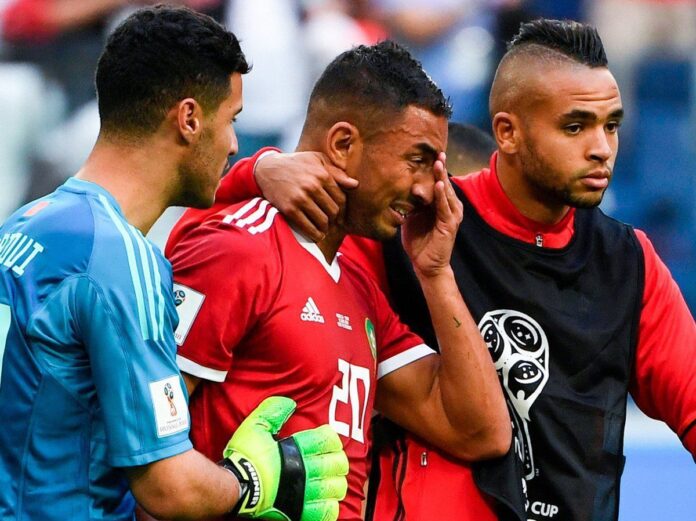 A number of Iranian footballers have identified with the National Moroccan Team’s forward, who scored an own goal in their World Cup match with Iran.

Aziz Bouhaddouz scored a 94th-minute goal only to leave the field with eyes brimful of tears. His own goal led to Iran’s historic victory and kept his team from winning any scores in their first World Cup appearance.

This came as players on the National Iranian Team were jumping for joy for their precious victory. However, some of them expressed empathy with the Moroccan player.

“In life, sometimes you win and sometimes you lose, but you shouldn’t let own goals bring you down. All of us are professional athletes and such incidents are part of football. I’m very happy and I’m very proud of my team and my country, and I also wish you all the best in your professional life,” wrote Iranian striker Reza Ghoochannejhad in a post on his Instagram page.

“Be a man and keep your faith,” wrote Sardar Azmoon.

“Keep your chin up! We’re all pros; so, don’t worry and be optimistic,” said Alireza Jahanbakhsh, who had to leave the pitch toward the end of the game due to an injury.

Meanwhile Bouhaddouz apologized to his teammates and the people of his country, saying, “I’m a fool!”

He said what happened in the end of the game (his own goal) was very difficult for him and other players on the Moroccan team.

“The game with Iran was very important for us,” he noted.

“The first match of any Cup games is as important as the final game, but we lost it. All I can do is to apologize to members of the national team and 35 million Moroccan people for the own goal I scored,” Bouhaddouz said.

He said he tries to adapt to what has happened, and added it is time to stand up and fight.