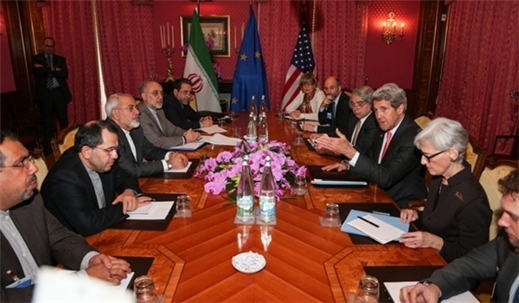 Foreign Minister Zarif has said, “Proper technical and political solutions have been found for the issues which couldn't be solved in the past".

“Proper technical and political solutions have been found for the issues which couldn’t be solved in the past,” Zarif wrote on his Facebook page on Saturday.

His comments were made after the ninth round of talks between the Iranian and US nuclear negotiators was held in Lausanne on Friday afternoon in the presence of Zarif, US Secretary of State John Kerry, their deputies, Head of the Atomic Energy Organization of Iran (AEOI) Ali Akbar Salehi, US Energy Secretary Ernest Moniz, and EU foreign policy chief Federica Mogherini and her deputy Helga Schmid.

“We were ready for negotiations, but the other sides needed more time for coordination,” he added.

“We have decided to return to Geneva on Wednesday to continue the talks, and God willingly, finalize the details of the solutions,” Zarif said.

Earlier, Iranian Deputy Foreign Minister and senior negotiator Abbas Araghchi said that the next round of nuclear negotiations with the world powers would start on Wednesday, March 25.

The US and European countries require more consultations and arrangements with their governments to continue talks with Iran, he said.

Talks between Iran and P5+1 were very serious and extensive, he said, adding that nuclear teams at this juncture are in need of more negotiations and coordination, Araghchi added.

To the same reason, foreign ministers of the European states and the US will meet in Berlin on Saturday and the next round of talks with Iran will be resumed on March 25, he said.

Iran and P5+1 are negotiating to narrow their differences over Tehran’s nuclear energy program ahead of a July 1 deadline.

Also on Tuesday, Salehi announced that Tehran and Washington had overcome their differences on technical issues with regard to Iran’s nuclear program in most of the cases, adding that both sides were trying to resolve the remaining technical problems.

“We have agreed on 90 percent of technical issues,” Salehi said after his second meeting with US Secretary of Energy Ernest Moniz in Lausanne, Switzerland, on Tuesday.

“There has only remained one very important point of difference that we will try to resolve in the evening talks,” he added.