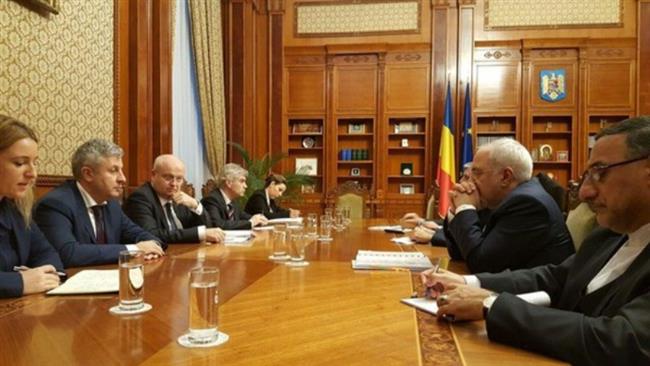 Zarif met with Romanian Prime Minister Dacian Ciolos, President Klaus Iohannis and the speaker of the lower house of parliament, Florin Iordache, in the capital Bucharest on Wednesday.

During his meeting with the top Iranian diplomat, the Romanian prime minister called for the further development of ties between the two countries in all sectors, Press TV reported.

Other issues, including the conflict in Syria and the campaign against terrorism and extremism, were also discussed during the meeting.

Moreover, the enhancement of political, economic and parliamentary ties was reviewed in a meeting between Zarif and Romania’s top parliamentarian.

The Iranian and Romanian officials also talked about the key role of the two countries in EU-Middle East relations.

The Romanian parliament backs cooperation with the Islamic Republic, Iordache told Zarif, adding that his country was willing to use Iran’s experience in the fight against terrorism and the issue of refugees.

Zarif also discussed ways to shore up Tehran-Bucharest ties in a meeting with the Romanian president.

Earlier, Zarif and his Romanian counterpart, Lazar Comanescu, signed two documents of cooperation during a meeting in Bucharest.

The two top diplomats sat down for talks on Wednesday and signed the two agreements concerning bilateral political consultations as well as the potential removal of visa restrictions for Romania-bound Iranian diplomats.

His visit to Romania is taking place in response to a three-day trip by his Romanian counterpart, Lazar Comanescu, which started on February 29.

Zarif is in Romania on the first leg of an East Europe tour that will also take him to Slovakia and the Czech Republic.