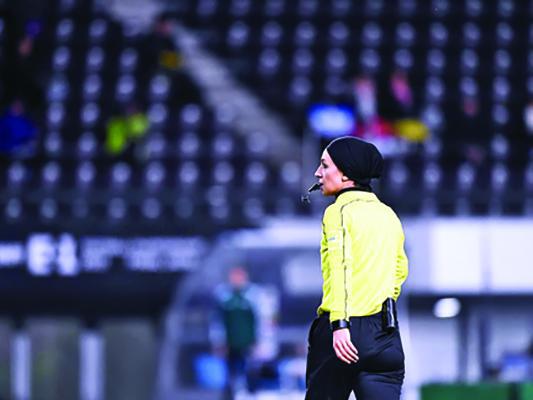 Qorbani began her career as a referee at the age of 15. Her name has been put on the Asian Football Confederation (AFC)’s list of elite referees due to her good performance. She says her ambition is to judge matches in World Cup competitions.

Qorbani is also reluctant to talk about her outfit in foreign matches. Although nowadays all eyes are on Alireza Faghani because of his presence in FIFA World Cup in Russia, Mahsa Qorbani is at the centre of attention, too, due to her presence in international football competitions.

She is the first Iranian lady who has judged men’s events as well. She excitedly talks about her experience of judging men’s matches and says she would like to have more experience in that regard.

What is interesting about Mahsa Qorbani is her different outfit compared to other women referees. She fully observes the AFC’s Dress Code, but the clothes she wears is different from those of others because she believes some outfits keep her from breathing.

In a recent interview with Shahrvand newspaper, she has made different and interesting comments about her career.

How did you get interested in becoming a referee in the football world?

During my childhood, whenever I watched a football match, the thing that attracted me the most was the refereeing of the game. I liked the character of referees and wanted to become a referee one day, but I did not know what to do. Finally, I entered the football world. At the beginning, I was an amateur goalkeeper for one of Tehran teams, and began my career as a referee in 2007.

When did you start your refereeing career professionally?

While I worked as a referee in the Iranian League, I began refereeing under-14 Asian football matches as well. When I began to work as a referee, the AFC had already sent a letter to the Iranian Football Federation saying they needed a referee no older than 25 years of age. Some features were important to them. Fortunately, I had their requirements, so I could referee the matches in under-14 Asian competitions for five consecutive years. After I passed two-year courses of the AFC in 2016, the confederation introduced me as an international referee in 2017, and I was elected as an elite referee after passing several other courses.

What was your family’s reaction when you decided to become a referee?

My family and friends were surprised at my decision because the general public believes there is no “women’s football” and football belongs to men. They would ask me if women’s football existed, after all. Gradually, I tried to make my family familiar with women’s football because they used to be uninterested in this field, but now they watch all football matches and even bet on teams!

Isn’t it difficult for you to referee matches on the international stage?

No, not at all. I have no problems refereeing matches outside Iran, and it is fine that their language is different from mine because I speak English very well, which gives me self-confidence.

What reactions do you see as an Iranian woman overseas?

All of those involved in women’s football are ladies, so they welcome one another’s progress. They know what limitations we are facing in Iran; so, when they see an Iranian referee has made her presence felt on the international stage, they respect her. All these things give me a lot of self-confidence and make me stronger.

You are the first Iranian woman referee to have refereed men’s football matches. How was this experience?

Some Asian events were held at the same time that I refereed matches by under-14 footballers. In one of the competitions held in the Maldives, I was supposed to referee a men’s match. I was the referee at a game between two teams of the Maldives’ 2nd Division League. It was a very good experience for me, and I would be happy to referee men’s football matches again.

How did male footballers see you as a female referee?

Naturally, they had a new look at me and maybe they had the feeling that a woman referee may not be able to judge fairly. Of course, we are seeing that there are female referees in other countries as well, which shows women’s football has a lot of potentialities. 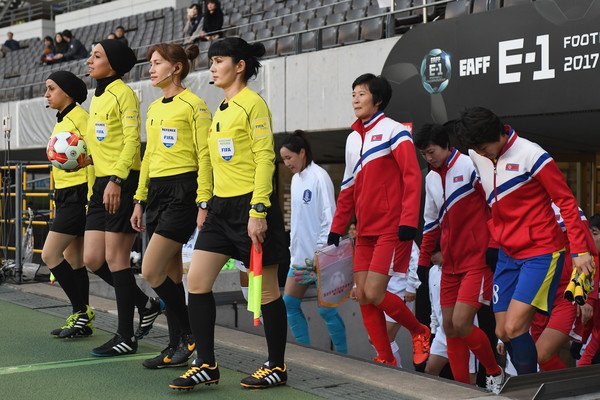 What’s your biggest dream as far as refereeing is concerned?

Any referee dreams of finding his/her way to World Cup contests, including the final match. Accordingly, I’d like to referee matches in the world’s biggest football forum one day and will spare no effort to have my dream come true.

I always try to follow up the matches judged by successful referees. I always watch the games refereed by Alireza Faghani and try to model my performance after him. I hope Faghani and his team will be successful in the World Cup and bring great honour upon Iran’s football.

As the last question, the kind of outfit you wear at international events has been controversial.

(She interrupts the interviewer and says) Let’s not talk about it.