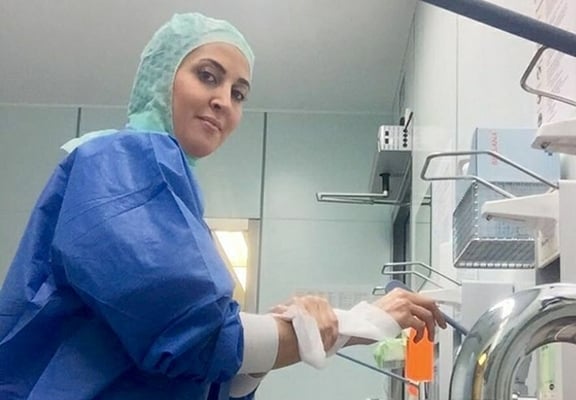 An Iranian female neurosurgeon has performed some 500 operations so far and turned into one of the most professional surgeons in her field.

28-year-old Soheila Saami is a student of professor Majid Samii who is a prominent internationally-recognised neurosurgeon.

Born in 1989, Soheila Saami is a graduate of from a University in UAE.

She finished her General Medicine program six years ago and currently works as a last-year resident of neurosurgery at Germany’s International Neuroscience Institute under the supervision of professor Samii.

Fars News Agency has conducted an interview with this young successful lady. Excerpts from the interview follow:

Q: How many surgeries have you performed so far?

A: The number of the surgeries I have performed alone exceeds 500, but I have done more than 3,000 operations as assistant surgeon.

Q: You live outside Iran, but you are wearing an Islamic headscarf in all your photos and surgeries. Why is that?

A: In my opinion, it is up to an individual to choose the kind of her or his clothing. I chose to wear hijab consciously. The way I dress is the same in Iran and Germany.

Q: Isn’t hijab a limitation for you?

A: Hijab has not been a limitation for me as far as performing surgeries are concerned. Of course, I’m not saying that you can do everything while wearing hijab, but, on the other hand, we cannot say one is unable to do social, sports or other activities while wearing hijab.

Q: Are you going to travel to Iran and practice medicine there?

Q: As the last question, what’s your idea about professor Samii?

Professor Samii was chosen as the founding president of the Congress of International Neurosurgeons (MASCIN) in 2003. He was also picked as the best surgeon of the year in 2018. All these bear testimonies to the fact that he is a distinguished and superb surgeon.