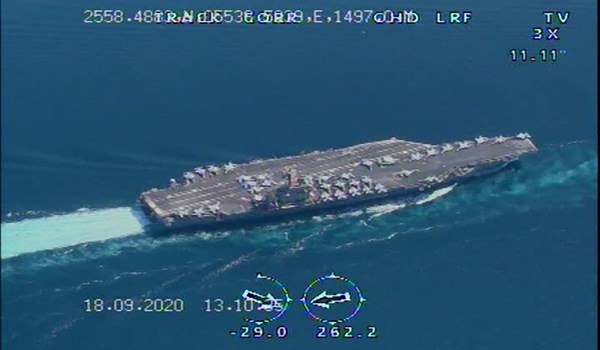 Advanced unmanned aerial vehicles operated by Iran's Islamic Revolution Guards Corps (IRGC) have managed to capture strikingly close footage of a US strike group, led by the USS Nimitz, right before its passage into the Persian Gulf through the Strait of Hormuz.

The video was released on Thursday by the IRGC-affiliated Fars News Agency.

The drones are seen zooming in on the flotilla to the point where each captured object’s details become clearly visible.

The footage begins by showing a sprawling arrangement of the Corps’ drone fleet and its speedboats, and is accompanied by a speech by the force’s Chief Commander Major General Hossein Salami, who addresses the country’s enemies.

“We say this to our enemies too as they are close to us, hear our voice, and see pictures depicting the growth of this manifestation of power,” General Salami is heard stating. “Take a salutary lesson. Should you perpetrate a blunder, we would crush you,” he says.

The commander notes, “Our naval force has stopped operating [too] close to the sea. By degrees, it will turn into a naval force outfitted with an [accompanying] air force, a seaborne air force. Here we stand strongly and steadfastly. We build up our power. We never stop. We advance on the horizon. We increase the combat radius of our weapons,” the official remarks.