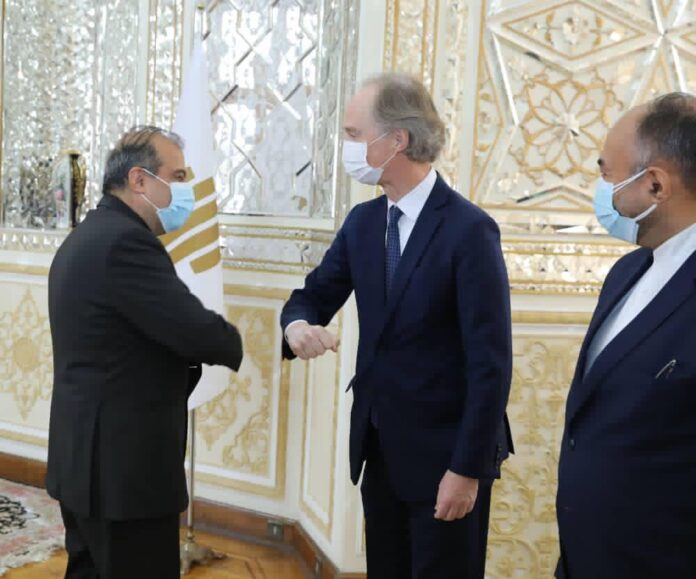 Geir O. Pedersen, who is visiting Tehran with a delegation for talks with the Iranian officials, held a meeting with Khaji to discuss the latest developments in Syria, including the Constitutional Committee, the conference on the return of Syrian refugees, and the situation in Idlib and east of the Euphrates.

In the meeting, the senior assistant to the Iranian Foreign Minister voiced support for Pedersen’s efforts to pursue a political solution to the crisis in Syria and the continuation of holding the Syrian Constitutional Committee meetings.

Khaji also criticized certain countries, specifically the Western states, for non-participation in the recent conference on the return of Syrian refugees and displaced persons, held in Damascus.

The Western countries, which claim to be advocating humanitarian issues, have held the humanitarian topics of Syria hostage to their political objectives and attempted to prevent the conference from being held, the Iranian diplomat deplored.

Khaji and Pedersen also discussed the latest developments in Idlib, expressing hope that implementation of the agreements over Idlib would maintain calm and prevent a resumption of disputes.

Pedersen, who is in Tehran to continue political consultations after a trip to Moscow, praised Iran for its efforts to support the political processes for the settlement of crisis in Syria.