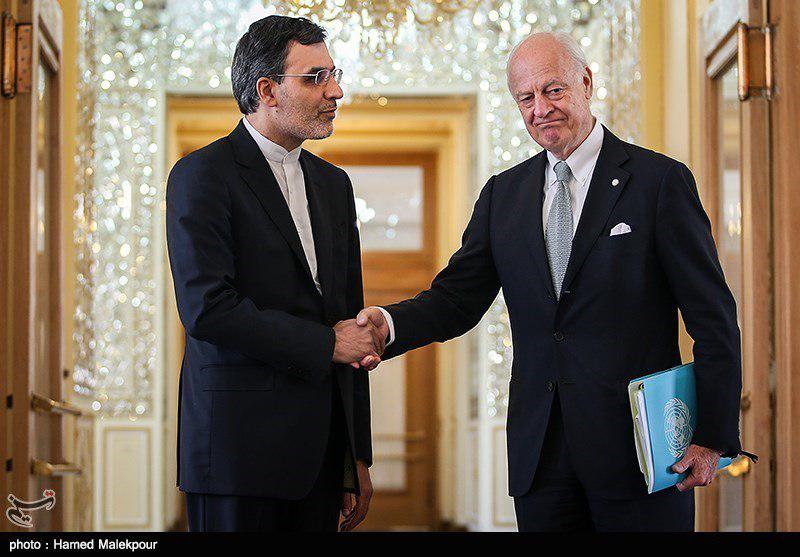 Hossein Jaberi Ansari, a senior assistant to Iran's foreign minister in political affairs, has held talks with the UN envoy for Syria as well as the heads of Russian and Turkish delegations in Geneva.

The Iranian diplomat, who arrived in the Swiss city on Monday, discussed the latest developments in Syria Peace Talks with Russia’s Sergei Vershinin and Turkey’s Sedat Önal. He also held negotiations with UN Special Envoy for Syria Staffan de Mistura.

During the bilateral, trilateral, and quadrilateral meetings, which lasted from 10 am to 6 pm on Tuesday, the parties focused on the process of restoring peace and tranquility to Syria, and exchanged views on the results of the Syrian National Dialogue Congress in Sochi as well as the forthcoming Astana Talks on Syria which is going to be held at the ministerial level between the three guarantor states.

The Iranian, Turkish, and Russian delegations and the UN special envoy for Syria further agreed that these quadrilateral talks continue to follow up on the outcome of the Astana Talks and the approvals of the Syrian National Dialogue Congress in Sochi so as to consolidate the constructive link between the Astana and Geneva negotiations.

Before his trip to Switzerland, Jaberi Ansari spent some time in Syria and held talks with high-ranking officials of the Arab country including President Bashar al-Assad.

Jaberi Ansari, who is Iran’s top negotiator at Syria Peace Talks, routinely holds talks with the envoys of Syria, Turkey, Russia, and the UN on the ways to find a resolution to the Syrian crisis. The latest round of such talks was held in Russia’s Sochi.