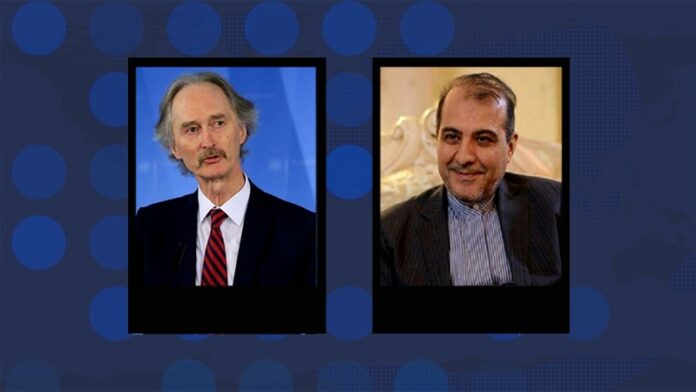 Ali-Asghar Khaji, a senior advisor to the Iranian foreign minister for special political affairs, had a conversation with UN Special Envoy for Syria Geir O. Pedersen.

During the talks, the two sides discussed political solutions to settle the Syria crisis as well as the need for the Syrian Constitutional Committee to move forward with its negotiations.

The Iranian official touched upon recent talks on Syria held in Tehran with the visiting Russian delegation.

He added the Syrian presidential election will be held based on the current Constitution, and highlighted the Constitution should be respected.
“The Islamic Republic of Iran supports Pedersen’s efforts to sustain talks on the constitution and holding an upcoming meeting of that committee,” said Khaji.

Pedersen, in turn, lauded Iran’s backing in that regard, saying he was in talks with Syrian sides to make arrangements for holding the sixth meeting of the committee.

The UN envoy said he would move forward with his consultations with key players, especially Iran.