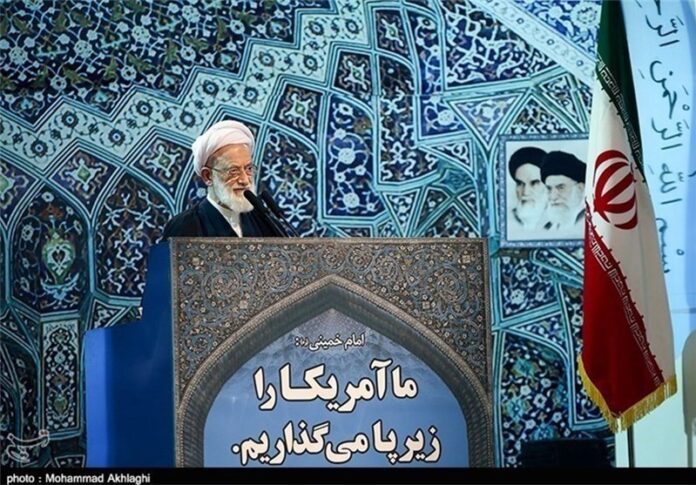 A senior Iranian cleric has called on Saudi clergymen and Muslim scholars to fulfil their religious obligation by warning the novice rulers of Saudi Arabia against making provocative decisions about regional issues.

Tehran’s interim Friday prayers leader Ayatollah Mohammad Emami Kashani told worshippers Saudi Arabia is run by a novice and imprudent crown prince who is under the deep influence of the US and the Zionist regime.

“The evil triangle of Washington, Tel Aviv and Riyadh is committing crimes in Syria, Yemen, Palestine, Lebanon, Iraq and Africa and sponsoring terrorist groups in the region,” he was quoted as saying in a Farsi report by ISNA.

He went on to blame Saudi Crown Prince Mohammed Bin Salman for levelling baseless accusations against Iran during his latest visit to Washington.

“The crown prince claims that Iran is meddling in the internal affairs of the Muslim world under religious pretexts. I don’t find such unsubstantiated remarks by the novice Saudi crown prince unexpected at all but I’m wondering how on the earth the senior clergymen and religious scholars in Saudi Arabia can remain silent towards such provocations.”

The senior cleric then said Saudi Arabia has always been run by novice and irreligious rulers who have been influenced by the US and the Zionist regime.

“In the past, the influence was not overt but today we see that the Saudi crown prince is overtly manipulated by the outside forces in Washington and Tel Aviv,” he noted.

He then directly addressed the Saudi clergymen, urging them to step into the fray and stop the wrong policies and animosity of their country’s inexperienced rulers towards regional states.

Elaborating on the evil triangle, Ayatollah Emami Kashani said it consists of the US power, the Zionist regime’s politics and Saudi Arabian ideology and money.

“The ideology of Saudi Arabia is aimed at depleting Islam of its main contents and principles. On the other hand, they spend a hefty sum of money to achieve their nasty regional goals,” he said.

The Iranian clergyman underlined that it is up to the Muslim states to stand united against the plots by the evil triangle.

During his latest visit to the US as part of an image-building tour, the Saudi crown prince accused Iran of meddling in the affairs of Arab countries, including in Yemen where a Saudi-led military coalition has waved a war.
He then warned failure to contain Iran through international action could lead to a war in 10 to 15 years.

Iran lashed out at the Saudi crown prince warning him “not to dice with death”. Iranian Foreign Ministry Spokesman Bahram Qassemi then called on veteran Saudi officials to teach the “delusional novice” of the fate former Iraqi leader Saddam Hussein endured after he challenged the “Iranian nation’s resolve”.