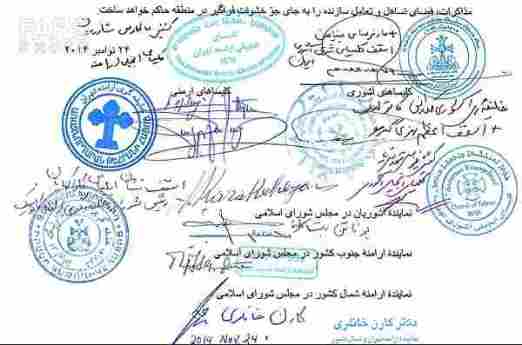 Iran's Assyrian and Armenian bishops in a letter to President Obama back the Vienna talks and a possible final deal on the country's nuclear program.

A host of high-ranking Assyrian and Armenian bishops in Iran have sent a letter to US President Barack Obama to express their full support for the ongoing nuclear talks between Iran and six world powers, describing the conclusion of a possible accord as a step forward toward establishment of sustainable peace.

Fars News Agency (FNA) on November 24 filed a report on the letter sent by the bishops of the Christian Assyrians and Armenians to the US president. The missive, which bears the signatures of the priests of Iran’s Christian community and their representatives in the Islamic Consultative Assembly, has some highlights as follow:

The experience [members of] the Christian community have gained from social life in Iran shows that despite the existing [anti-Iran] media hype, Muslim Iranians enjoy an old civilization and rich culture and have strong faith in Islamic principles and religious teachings.

Iran’s traditions which have been established based on religious beliefs and teachings have left a deep ideological and ethical impact on the country’s ruling system, political life and social relations. A case in point is the country’s religious tolerance which has manifested itself in the direct presence of people representing religious minorities in parliament; freedom to practice their faith, live their own communal life, and learn their mother tongue and their religious principles.

A fatwa issued by the Supreme Leader and the commander-in-chief of the armed forces banning the supply, purchase, production or use of atomic weaponry is yet another proof that like other divine faiths Shiite clerics disapprove of and reject weapons of mass destruction, chemical and nuclear arms included.

The fatwa is of great essence in Islamic traditions since it is binding on Muslims and they are required by their faith to comply with such edicts.

We, the archbishops of the Armenian and Assyrian churches in Iran, together with our representatives in the Islamic Consultative Assembly, fully support the ongoing nuclear talks with P5+1. Any possible deal which would come out of the talks will be a step forward in efforts to establish sustainable peace. A fair result of the talks could see tolerance and constructive interaction take the place of pervasive violence in the region.