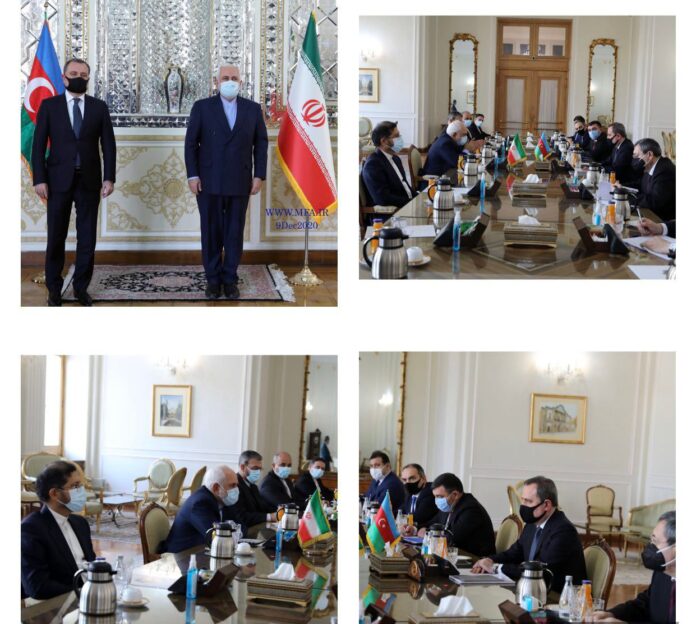 Foreign Minister of the Republic of Azerbaijani Jeyhun Bayramov and his Iranian counterpart Mohammad Javad Zarif had a meeting in Tehran on Wednesday.

Extending a welcome to the visiting Azerbaijani diplomat, Foreign Minister Zarif hailed the progress achieved in the course of a ceasefire between Baku and Yerevan, the peace agreement, and an end to the occupation of the Republic of Azerbaijan’s territories.

Foreign Minister Zarif also expounded on Iran’s principled policies on the Caucasus region on the basis of good neighbourliness, and stressed the need for permanent settlement of the crisis through dialogue and political solutions.

For his part, Foreign Minister Bayramov offered his condolences on the martyrdom of Iranian scientist Mohsen Fakhrizadeh and condemned the assassination of the late figure.

The Azerbaijani foreign minister also expressed gratitude to Iran for its principled policies during the Karabakh crisis and for supporting the termination of occupation, saying Iran adopted a balanced policy towards the Karabakh conflict.

Elsewhere in the gathering, the two senior diplomats discussed other topics such as the expansion of Tehran-Baku relations, mutual cooperation at the international circles, the Caspian Sea, reconstruction projects in the newly-liberated regions, border and security cooperation, the joint projects in progress, inauguration of Khoda-Afarin dam, the Rasht-Astara railroad, the North-South and East-West corridors, convening Iran-Azerbaijan Joint Economic Commission, and other issues of mutual interest.

The foreign ministers of Iran and the Republic of Azerbaijan also held consultations about the regional and international issues.