Iran will never give up nuclear rights: Zarif 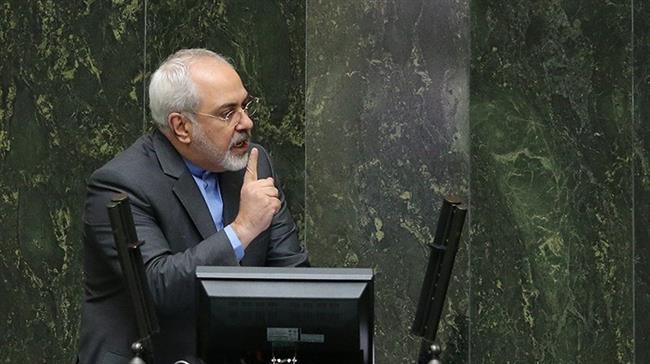 Iran’s Foreign Minister Mohammad Javad Zarif says Tehran will never give up the nuclear rights of the Iranian nation, vowing to defend national interests in nuclear talks with P5+1.

“In these negotiations, we will defend the interests of all people and take the country’s high goals into consideration,” Zarif said at an open session of Iran’s Parliament (Majlis) on Tuesday in response to questions by 40 lawmakers.

He pointed to Iran’s “effective and serious” presence and role in regional and international developments and added that the ill-wishers of Iran and the Islamic Revolution organized and implemented a relatively long-term plot to portray the Islamic Republic’s peaceful nuclear activities as a threat with two major objectives.

The first one, the Iranian minister said, was to “portray an insecure and dangerous image of Iran, [as a country] which endangers global peace and security; and the second one was to weaken the country’s economic, defense and industrial capability and exert pressure on our good people” through various cruel sanctions, including by the UN Security Council as well as unilateral bans.

The nuclear negotiations, however, illustrated an “interactive, stable and powerful” image of Iran and prevented the expansion of sanctions, he pointed out.

Zarif said that, following the Geneva deal reached between Iran and the P5+1 countries in November 2013, Iran’s foreign policy managed to counter the hostile propaganda against the Islamic Republic and boost the country’s security and power.

“I assure you that the [Iranian] government and negotiating team have never followed and will never follow any political and factional objective in the nuclear talks,” the top Iranian nuclear negotiator added.

Iran and the five permanent members of the UN Security Council – Russia, China, France, Britain and the US – plus Germany wrapped up their latest round of talks on the Islamic Republic’s nuclear program in the Swiss city of Geneva on December 17, 2014.

The three-day Geneva discussions were held almost three weeks after Tehran and the six countries failed to reach a final agreement by a November 24 deadline despite making some progress. Back then, the two sides agreed to extend their discussions for seven more months until July 1, 2015. They also agreed that the interim deal they had signed in Geneva in November 2013 should remain in place during the negotiations.