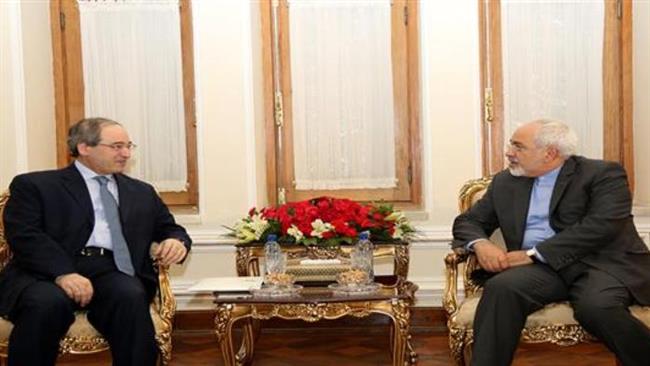 Tehran is deeply concerned about the killing of defenseless people in Yemen and will make its utmost efforts to bring an end to this massacre, said Zarif.

Iran’s Foreign Minister Mohammad Javad Zarif says the Islamic Republic will do its utmost to end the bloodshed in Yemen as Saudi Arabia continues its brutal military campaign against the impoverished Arab country.

“We are deeply concerned over the killing of defenseless and innocent people in Yemen and the destruction of the country’s infrastructure and we will make our utmost efforts to bring an end to this massacre,” Zarif said in a meeting with Syrian Deputy Foreign Minister Faisal al-Miqdad in Tehran on Monday.

Saudi Arabia started its airstrikes against Yemen on March 26 – without a United Nations mandate – in a bid to restore power to the country’s fugitive former president, Abd Rabbuh Mansur Hadi, a staunch ally of Riyadh.

According to reports, at least 2,680 people, including women and children, have so far lost their lives in the attacks.

Zarif further commended Syria’s efforts in fighting foreign-backed terrorist groups and called for the continuation of talks between the Syrian government and the opposition.

The Syrian official, for his part, said his country supports Iran’s four-point peace plan submitted to the United Nations on the ongoing crisis in Yemen.

In a letter to UN Secretary General Ban Ki-moon on Friday, the Iranian foreign minister submitted a four-point peace plan on Yemen in an attempt to end the bloodshed in the impoverished Arab country.

The plan calls on the international community to take the necessary measures to stop the Saudi airstrikes against the Yemeni people.

“It is imperative for the international community to get more effectively involved in ending the senseless aerial attacks and establishing a ceasefire,” said the Iranian minister.