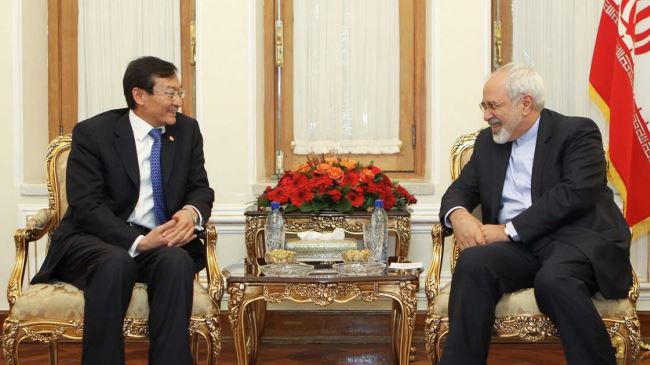 It’s necessary for the relevant sectors in Iran and China to take steps toward implementation of the agreements signed by the Iranian and Chinese presidents in Shanghai, said Zarif.

He made the remarks at a meeting with Chinese Deputy Foreign Minister Zhang Ming in Tehran on Sunday.

“The Iranian and Chinese presidents paved the ground to further boost ties in their last meeting in (the Chinese city of) Shanghai, and It’s necessary for the relevant sectors in both countries to take steps toward implementation of the agreements signed by them,” Zarif said.

Zarif also hailed China’s positive role in the ongoing nuclear talks between Iran and the P5+1 Group (the five permanent members of the UN Security Council plus Germany).

Zhang, for his part, referred to the growing number of meetings between Iranian and Chinese officials in the last year, saying, “Relations between China and Iran is on the rise in all spheres, and we believe the two countries’ ties are strategic.”

Regarding Iran’s nuclear negotiations with the six world powers, Zhang expressed hope that the talks would lead to a comprehensive agreement.

Beijing welcomes a comprehensive nuclear deal that can “lead to allaying concerns on both sides,” he noted.