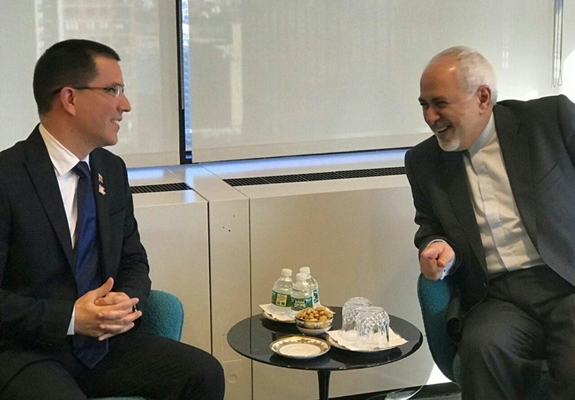 Iranian Foreign Minister Mohammad Javad Zarif and his Venezuelan counterpart Jorge Arreaza have, in a meeting in New York, denounced the interference of certain countries, led by the US, in the Latin American country’s internal affairs.

During the meeting, Zarif highlighted Iran’s efforts to expand its economic relations with Venezuela, and underlined Tehran’s continued support for the Latin American state.

He also emphasized the need for non-interference of foreign sides in Venezuela’s internal affairs, the necessity of respecting international law, and the significance of Iran’s cooperation and coordination with other countries opposed to unilateralism at the international order.

Arreaza, for his part, appreciated Iran’s assistance and support for his country, and underlined the importance of continued consultations between the two countries.

He also highlighted the extensive efforts of Caracas to counter the unfair campaign of certain countries, led by the US, to “painfully” interfere in his country’s internal affairs.

He finally stressed the significance of stability in Venezuela, the government’s full control over the situation, the opposition of the majority of Venezuelans to the US’ interventions, an increase in public support for the country’s legitimate government, the opposition groups’ devotion to the US, and the fact that they are not allowed to hold any negotiation.

In recent months, tensions have increased between Caracas and Washington with the US imposing sanctions on Venezuelan President Nicolas Maduro as well as his government.

In January, the US took the lead in recognizing Juan Guaido as Venezuela’s president after the head of the opposition-ruled Congress named himself the country’s interim chief executive. Washington has been pressuring other countries into following suit and has not ruled out using the military option to oust the government of Venezuelan President Nicolas Maduro.

Russia, China, and Cuba, however, back Maduro’s government in the face of the US pressure.