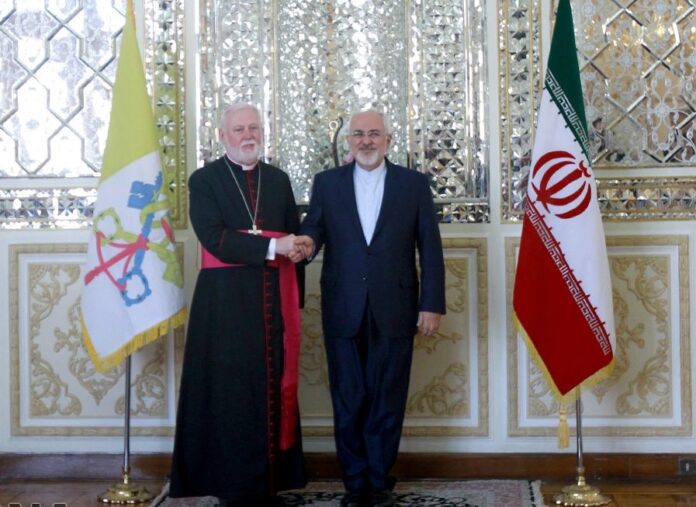 Iranian foreign minister and Vatican City’s secretary for relations with states have conferred on the desperate situation of Muslims in Myanmar, calling for an international effort to end the plight.

In a Wednesday meeting with Vatican City’s Paul Richard Gallagher in Tehran, Iran’s Foreign Minister Mohammad Javad Zarif referred to the issue of the Rohingya Muslims in Myanmar and called on all countries to cooperate and join hands to stop the massacre and mass expulsion of Muslims in the country.

The Iranian top diplomat also appreciated Vatican City’s efforts in this regard.

Speaking about the crisis in the Korean Peninsula, the Iranian FM added that after the Cuban crisis the world has forgotten the danger of using these weapons, but again we are witnessing that this great danger is posing threats to the international community.

Talking about the region’s critical conditions, the Iranian foreign minister underlined the need for peaceful solutions to overcome these crises, stressing that the world’s problem today is extremism, which is not limited to a special region.

He also referred to the long-standing, respectful and reciprocal relations between Tehran and the Holy See (Vatican City) and emphasized the need for dialogue and effective cooperation between religions and civilizations.

“Iran respects the character and positions of the Pope,” Zarif went on to say.

In turn, Gallagher referred to Vatican City’s efforts to resolve the crisis in Myanmar, saying that “we will continue our efforts in this regard.”

He also discussed the shared views between Tehran and Vatican City on regional developments and dialogue and cooperation to end regional crises, the refugee crisis, and extremism.

He said Vatican City has supported the peaceful use of nuclear energy and Iran’s nuclear deal, and it still throws its weight behind it.

“Encouraging the culture of peace and the peaceful coexistence of religions in the Middle East should be pursued with earnestness and the Vatican has always supported this coexistence between religions,” he added.

The Iranian foreign minister and his counterpart from the Holy See also exchanged views on various political, social and inter-regional issues, expressing satisfaction with the process of dialogue between the two sides.