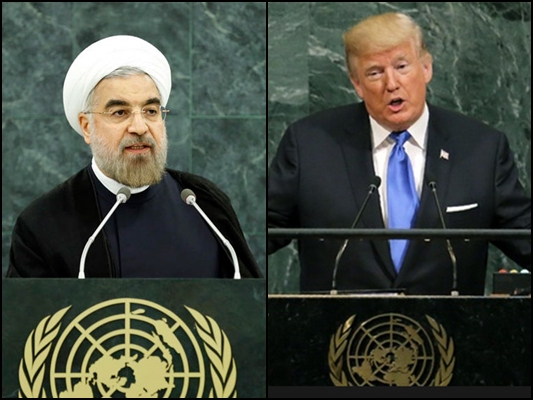 The speeches by Iranian and US presidents at the UN General Assembly have remain in the spotlight in political and media circles.

Iranian Persian-language newspapers Ettela’at, Iran, and Shargh allocated part of their stories on September 25 to Trump and Rouhani’s UNGA speeches. The press warned about Trump’s possible adventurism vis-à-vis Iran and suggested solutions to counter Washington’s policies against Iran and the Iran nuclear deal.

Masoud Razavi has, in an article published in Ettela’at on September 25, warned that Trump’s illogical and unconventional language and remarks should not be taken lightly. The commentator also says Trump’s comments and threats should be taken more seriously than others’ remarks due to this very lack of logic on the part of Trump and his disregard for international norms and regulations. Iran should also act very prudently when it comes to its nuclear deal with the six world powers known as the Joint Comprehensive Plan of Action (JCPOA).

“Trump’s comments lack in logical, human and even commonly accepted political norms. However, his remarks should not be underestimated or ignored due to this lack of logic and his turning a blind eye to widely accepted political norms and international rules and accords, Trump may go for adventurism. So, we shouldn’t start playing in his court.” the analyst underlines.

Mahmoud Mohammadi, a former Iranian Foreign Ministry spokesman, wrote in an article in the Persian-language Iran daily that “Trump’s extremism” is an opportunity for Iran’s success and victory.

“This year in the arena of New York, all factors joined hands to pit Iranian diplomacy against that of the US under Trump. Trump’s team entered the scene in a bid to undermine the JCPOA, and Rouhani’s team sat down for talks with top dignitaries aiming to safeguard the JCPOA and scuttle White House extremists’ plans,” said Mohammadi.

The former Iranian Foreign Ministry spokesman said thinking and dialogue based on moderation and tolerance have a miraculous effect both domestically and on the international stage.

“In the recent [UN] meeting, Rouhani represented and symbolized a way of thought which depicts Iran and Islam as symbols of unity among different groups and peaceful coexistence, and at the same time clears the image of Iranians and Muslims of the stigma of violence-seeking and extremism,” he concludes.

Javid Qorbanughli, a former top Iranian Foreign Ministry official, has, in an article published in the Shargh newspaper, praised Rouhani’s speech at the UN. He has also underlined that Iran’s peace-seeking stance against the US president’s bellicose language has promoted Iran’s status on the international stage. The analyst has also predicted Washington’s future policies on Iran and suggested solutions to counter them.

“Incontrovertibly, the United States’ military might, economic superiority, leverage and influential diplomacy in the world serve as backup for Trump’s rhetoric in order to promote warmongering policies. Although Trump’s speech will not be to the detriment of Iran that much due to support from European countries as well as Russia and China, it might be problematic for Iran on the economic front when it comes to winning foreign banks and investors’ trust.

Accordingly, it is suggested that, first of all we insist on Iran’s compliance with the nuclear deal as in the past two years and refrain from any move that would provide Trump’s adventurous team with an opportunity to launch a smear campaign against Iran. Secondly, given that Trump and the Zionist regime of Israel are focusing their attention on what they call Iran’s destabilizing activities in the region, Iran’s diplomacy should be focused on the region, enhancement of ties with neighbours and turning military achievements into political power through cooperation with other players. Thirdly, what is required to achieve these goals is unity, rapport and efforts to set aside the problems caused by differences of opinion over domestic issues. In other words, the world should hear only one voice and see only one position from Iran on regional and international issues and crises,” he writes.