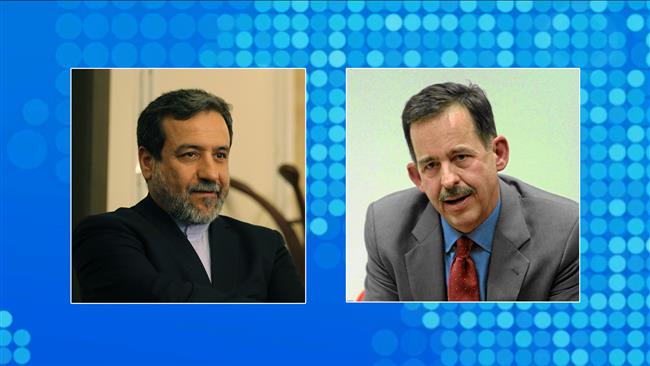 Abbas Araghchi expressed hope that JCPOA would be implemented without facing any “technical problem.”

Representatives of Iran and the United States have discussed ways to implement a landmark nuclear deal reached between the Islamic Republic and six world powers in July.

Iran’s Deputy Foreign Minister for Legal and International Affairs Abbas Araghchi held an hour-long meeting in the Austrian capital of Vienna on Tuesday with Stephen Mull, who is the US lead coordinator for the implementation of the Joint Comprehensive Plan of Action (JCPOA).

Speaking to reporters after his meeting with the US official, Araghchi described the coming weeks as “sensitive” for the implementation of JCPOA.

He said that Iran and P5+1 should precisely meet certain obligations required under JCPOA.

The Iranian official expressed hope that JCPOA would be implemented without facing any “technical problem.”

On July 14, Iran and P5+1– the United States, Britain, France, China and Russia plus Germany – finalized the text of the JCPOA in Vienna.

Araghchi, who is the head of Iran Foreign Ministry’s committee for following up on the implementation of the JCPOA, also held talks with Director General of the International Atomic Energy Agency (IAEA) Yukiya Amano in Vienna later on Tuesday.

Meanwhile, an Iranian delegation of experts held the final round of talks on Tuesday with IAEA on finalizing outstanding issues with regard to Iran’s nuclear program. Hamid Baeedinejad, the director general for political and international security affairs at Iran’s Foreign Ministry, led the delegation while IAEA deputy chief Vario was heading the agency’s team.

The IAEA chief will submit his latest report on Iran’s nuclear issue to the agency’s Board of Governors on December 1.

The governing board will review the report within 10-14 days and will probably announce its final decision on December 15.

Iran has repeatedly said it would abide by its commitments under JCPOA, saying other parties to the agreement are also required to honor their obligations.