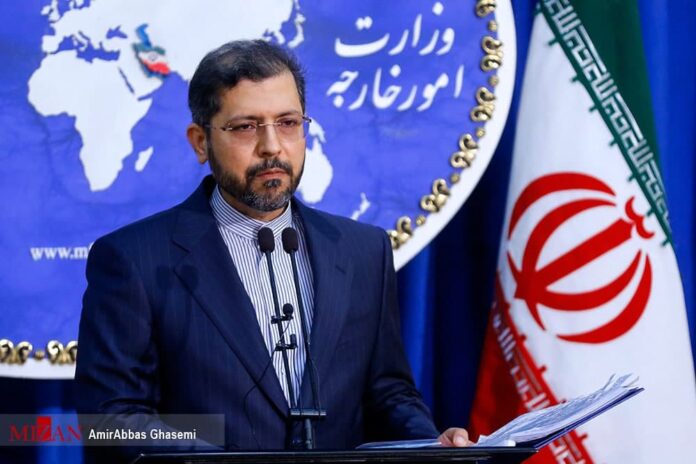 Iran’s Foreign Ministry Spokesman Saeed Khatibzadeh has called for the formation of an inclusive government in Afghanistan, saying Tehran is closely monitoring the situation and is in close contact with all parties in the country.

“The Islamic Republic of Iran invites all parties to exercise restraint, believes the establishment of peace and stability in Afghanistan is what people of the country and the regional countries wish and hopes that Afghan people and factions use, to the best, the opportunity created by the withdrawal of foreign forces to from an inclusive, transparent and accountable government that reflect [the wishes of] all Afghan ethnicities and keeps good relations with neighboring countries. The history of Afghanistan shows the crisis in the country does not have a military solution and just as occupation was not the solution in the country, there is no military solution for resolving problems. The Islamic Republic of Iran is ready to facilitate an agreement among different parties in Afghanistan.

Over the past 40 years, the Islamic Republic of Iran has always stood next to the Afghan people and will continue to do so in the current sensitive chapter. The Islamic Republic of Iran reiterates to all ethnicities and groups the necessity of protecting the lives, properties, and families of the people as well as historical buildings and assets and scientific achievements [of Afghanistan],” the spokesman said during his weekly presser.

“The Islamic Republic of Iran has been hosting millions of Afghan refugees over the past 40 years. The people of Afghanistan are our neighbors. We have deep ties with them and they are within our civilizational sphere. Therefore, we have done as a neighbor would do. In the current situation, we ask all parties to create a calm atmosphere in Afghanistan and focus all efforts on people having peace of mind in their place of residence.”

Khatibzadeh also touched on the United States’ actions in Afghanistan, saying Washington learnt a lesson in the country.

“The US entered Afghanistan as an aggressor. Its entry was a plight and its withdrawal was a mess. This is a historical lesson for all. Wherever the US has stepped in, it has caused destruction, rather than establishing peace and security. Images that came out of Afghanistan breaks the heart of anyone and is historical shame for the self-proclaimed champions of human rights, who do not say a word in this situation, except to justify their acts of aggression. We advise Washington to respect the rights of nations and international law,” he noted.

The spokesman was also asked about Iran’s position on the anti-Taliban resistance, taking shape in Panshir Valley of Afghanistan.

“We invite all parties to exercise restraint and engage in talks and seek a political solution.

Everything that happens in Afghanistan and any move toward the formation of a stable government should reflect the population and ethnic structure of Afghanistan and this can be a result of a political solution and talks among Afghans,” he said.

Khatibzadeh also confirmed an upcoming visit by the Pakistani foreign minister to Tehran.
“The visit by the Pakistani foreign minister is planned, at his request, for Thursday. The objective of the visit is surely bilateral issues and especially Afghanistan. It is natural for Iran as a pillar of promotion of peace and security in this region, to have its contacts and consultations with all countries,” he noted.

Khatibzadeh also touched on the Vienna talks concerning the nuclear deal and the change in the executive branch of power in Iran.

“Some changes due to changes in the executive branch of the Iranian government are natural. Of course, the state position of the Islamic Republic of Iran is what have been announced time and again. The negotiating parties should not miscalculate. Our position is what it was; removal of all sanctions related to the nuclear deal and verification of commitment to the agreement. The date [for the next phase of the talks] will be announced after the changes are finalized and we are confident in [the positions] of our negotiating parties as part of the 4+1 [group of countries],” he said.

The spokesman also called energy commerce an ordinary issue, when asked about shipment of Iran’s fuel to Lebanon.

“Normal trade in the energy sector is an ordinary and common decision. We have sold and sell our oil and [other] goods based on our own decision and demand from our clients. On this specific issue, we cannot watch the pain and suffering plotted against the people of Lebanon. The Lebanese are proud people suffering this shortage due to behind-the-scenes horse-trading, in which Zionist elements are involved. This is despite the fact that they are both a rich nation and have the financial means to buy energy shipments. The Islamic Republic of Iran surely does not allow the arrogant powers to treat people of the region like that,” he said.

The spokesman also rejected the joint statement by the UK, France and Germany, in which they expressed concerns about Iran’s nuclear program.
“What Iran has done has been in compliance with the NPT and the Nuclear Safe Guards Agreement, under the supervision of the IAEA and Iran’s activities, and its recent move, have been conducted for peaceful purposes. This political statement does not clear the three European countries of their responsibility for breaching the nuclear agreement. These statements are not only political but also illegal. These three countries should explain where they were and what statement they issued and what step they took after the US withdrawal from the accord and the maximum pressure campaign of the aggressive government of the US against Iran and [Washington’s] state terrorism in the economic sector, and even in the health sector, against the people of Iran,” he said.

“We try to make sure Vienna talks are meaningful if other parties fulfill their obligations.”

The spokesman also talked about the recent visit by the Japanese foreign minister to Iran, saying “there was no talk of mediation” during his meetings with Iranian officials.

He added that a new time will be naturally set for the Vienna talks but he warned that “time is not passing in favor of the nuclear deal”.

The spokesman also addressed the comments by the former US Secretary of State Mike Pompeo on the country’s withdrawal from Afghanistan and his hostile remarks on former Iranian IRGC commander Lieutenant General Qassem Soleimani, who was assassinated by the US in Iraq.
“What was said by the current Fox News commentator and former extremist US secretary of state is regrettable. When he was the state secretary, proper answers were given to him.

Americans, themselves, say that the Trump administration was a circle of villains and this person was well-known among them. He has acknowledged time and again that he masters theft, deception and all other normal process in the intelligence and security services of the US.

“He does not know or has not been told that martyrdom for God is the highest honor for us. The most peace-making General of the region was martyred by the most vicious people. We have announced time and against that we do not allow those who were involved in the cowardly assassination, moved to implement it, made a decision to carry it out and executed it escape without punishment. What we did in Ain al-Asad [Airbase] was a response to their [Americans’] act of aggression, not their assassination of General Soleimani. Definitely, we will hold to account all those involved in this. We have held no meeting with other countries or with international organizations except that we raised this issue there,” he said.

“The Fox News commentator should watch on what topic he comments. Anyone who witnesses what has happened in Afghanistan [clearly] sees the mess the US has created for the people in the region and Afghanistan.”