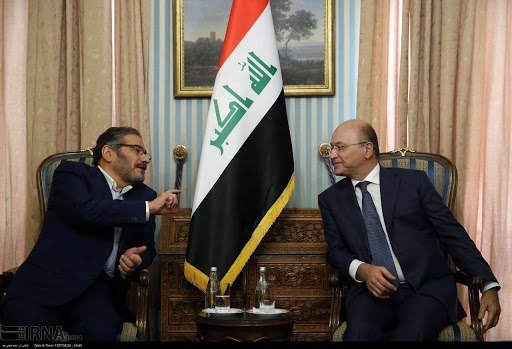 Secretary of Iran’s Supreme National Security Council Ali Shamkhani says cooperation and tolerance is required on the part of political groups and ethnic and religious factions in Iraq so that a government growing from the will of Iraqi people “will take over as soon as possible.”

Shamkhani made the remarks in a meeting with Iraqi President Barham Salih during his visit to the Arab country.

Describing the political structure of Iraq as “progressive”, “stable” and “capable of overcoming the recent political and social turmoils,” Shamkhani said “the principled position of the Islamic Republic of Iran is to show consistent support for Iraq’s sovereignty, independence and the Iraqi people’s will.”

“The intelligent and cultured people of Iraq who inflicted defeat and humiliation on Takfiri terrorism, discern their expedience and interests well, and don’t need foreigners to be present and impose their opinions,” the official added.

In turn, Salih said that “in their recent protests, Iraqi people demanded improvement of services and combatting the spread of corruption, and therefore reforms are necessary and the government should be strengthened to fulfill these demands.”

Emphasizing that in Iraq “the election of the prime minister is the Shiites’ responsibility,” he said that the choice “needs to be followed by the support of Kurds and Sunnis.

“The nomination of the new prime minister and the formation of the new government should be hastened and the only way out of the current crisis in Iraq is through national unity,” he added.

Describing the US assassination of General Qassem Soleimani and Abu Mahdi al-Muhandis as “a heavy blow to the axis of resistance,” Salih said “on the difficult road to combatting terrorism, Iran has always been a companion to the Iraqi government and nation.”

Pointing to the danger of ISIS’ return, he stressed the need for spread of mutual collaborations between the two countries in the area of combatting terrorism and extremism.