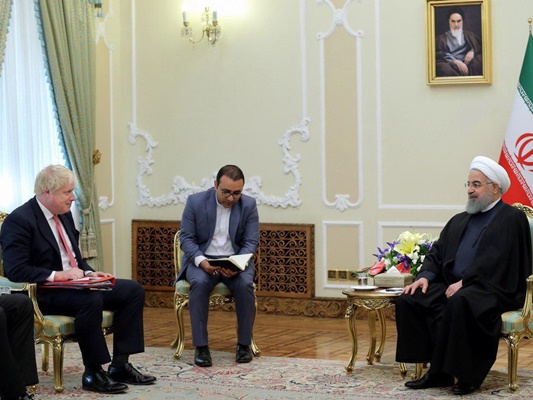 Iranian President Hassan Rouhani says the expansion of cooperation between the Islamic Republic of Iran and the United Kingdom can lead to further stability in the Middle East.

In a Sunday meeting with visiting UK Foreign Secretary Boris Johnson in Tehran, Rouhani said the Islamic Republic of Iran has always been after establishing peace and security in the region.

Dialogue between Iran and the UK can contribute to efforts being made to this end, he noted, according to a Farsi report by the president’s official website.

Rouhani underlined the need for expansion of balanced and friendly ties between Iran and the UK and said despite the appropriate grounds created following the Joint Comprehensive Plan of Action (JCPOA), the relations between the two sides have not yet grown as expected.

“To reach the ideal point in bilateral relations, the two sides need to try harder and take concrete steps,” he noted, calling for promotion of banking ties between Iran and the UK.

He also pointed to the nuclear deal between Tehran and world powers, and said preserving and implementing the accord is highly significant.

“We maintain that all sides, particularly the Iranian nation, should be able to reap the fruits of the nuclear deal.”

The Iranian president also warned about the vulnerable situation of the region and said, “The region is going through a sensitive time in which all regional sides should avoid fanning the flame of chaos.”

He vehemently condemned the US for its provocative decision to recognize Jerusalem al-Quds as the Israeli regime’s capital and said the decision amounts to fuelling the fire that has engulfed the region.

For his part, the visiting British foreign secretary said the JCPOA has created an appropriate ground for expansion of bilateral ties, adding that the UK views the JCPOA as a positive deal which should not be violated at all.

He also said his country is determined to strengthen its relations with Iran in various fields, adding that Iran enjoys good economic capacities.

“We are interested to see more UK companies in Iran for investment in the country.”

Johnson praised Iran for its contribution to fight against terrorism and establishment of peace and security throughout the region and said the UK does not endorse the decision of US President Donald Trump to relocate the US embassy from Tel Aviv to Jerusalem al-Quds.