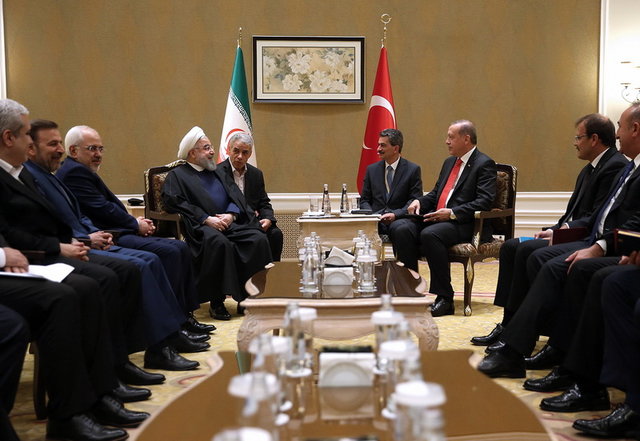 Iranian President Hassan Rouhani and his Turkish counterpart Recep Tayyip Erdogan have called for closer cooperation between Tehran and Ankara.

“Facilitating banking transactions is an important platform for developing ties and cooperation between both countries,” said Rouhani after a meeting with Erdogan in Kazakhstan’s capital  Astana on Saturday ahead of a summit of the Organization of Islamic Cooperation.

Both leaders also stressed the importance of delivering aid to the people of Myanmar, where security forces have been attacking the Rohingya Muslims and torching their villages since October 2016 in a bid to push them out of the western state of Rakhine.

Rouhani noted that Iran would be sending humanitarian aid to those affected in the crackdown, and called for an end to the violence against the Rohingya Muslims.

In his turn, Erdogan also stressed that the government in Myanmar must be pressured into halting its atrocities.

Rohingya Muslims fleeing violence and persecution in their home country of Myanmar continue to arrive in Bangladesh. Refugees are waiting for hand-out from aid agencies since they lack food, clean water and shelter. Locals say many of the Rohingya refugees are also sick and wounded. Thousands of the displaced people have been stranded or left without enough food for weeks.

Myanmar’s leader Aung San Suu Kyi is under fire by the international community and rights groups for allowing the government troops and the Buddhist mobs to further impose a violent clampdown on the desperate minority.

Suu Kyi, who was awarded the Nobel Peace Prize in 1991, is also heavily criticized by a number of her fellow Nobel laureates, including Malala Yousafzai and Desmond Tutu, for allowing such atrocities against the Rohingya.