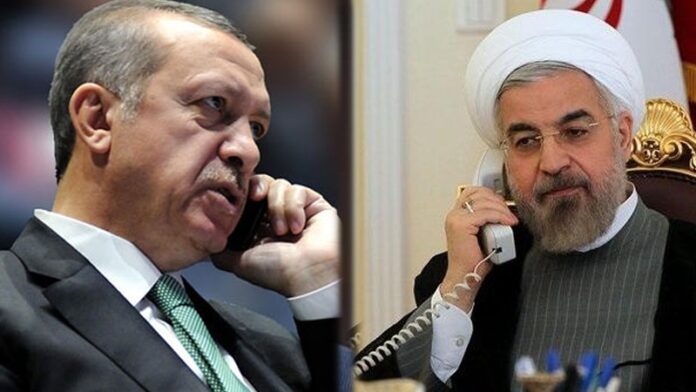 The presidents of Iran and Turkey have called for uninterrupted trade exchanges between the two neighbors, stressing the need for close economic interaction in conformity with the health regulations to avert the spread of coronavirus.

In a telephone conversation on Wednesday evening, Iranian President Hassan Rouhani and his Turkish counterpart Recep Tayyip Erdogan hailed the “friendly, brotherly and growing” ties between Tehran and Ankara for the purpose of serving the interests of the two nations and establishing sustainable security and stability in the region.

In the conversation, President Rouhani congratulated the Turkish government and nation on the start of the Muslim month of Ramadan, expressing hope that the holy fasting month would be a source of blessing and prosperity for the entire Muslim world.

Pointing to the numerous problems that the outbreak of coronavirus has caused for the governments and nations across the world, President Rouhani said, “Iran and Turkey proved that they have stood together in the hard days and in difficulties, and we should also assist each other today by promoting cooperation.”

Highlighting Iran’s success and experiences in the battle with the coronavirus, the president stressed the need for close interaction between the Iranian and Turkish officials and the exchange of experiences between the two neighbors.

He further stressed the importance of plans to preserve the bilateral trade exchanges at the common border in conformity with the health regulations, and called on the officials of the two countries to push for the promotion of economic and trade interaction between Iran and Turkey.

President Rouhani further lashed out at the US for imposing severe pressures and cruel sanctions on the Iranian nation amid the outbreak of coronavirus and for attempting to block Tehran’s request for an emergency International Monetary Fund loan to fight COVID-19, adding, “Today, the whole countries must adopt clear and decisive stances against the US’ anti-human pressures.”

He further highlighted the importance of consultations and negotiations among Iran, Turkey and Russia for implementing the Astana Peace Process agreements, stating, “All of us should try to let the people of Syria and the regional nations enjoy stability, and I hope that the efforts from the three countries would establish peace and full security in the region to the benefit of all countries and nations.”

President Rouhani also welcomed the Turkish leader’s proposal for a summit of Iran, Turkey and Russia within the framework of the Astana format and for holding a meeting of Iran-Turkey Cooperation Supreme Council via video conference.

For his part, President Erdogan congratulated the Iranian government and nation on the beginning of the month of Ramadan, and prayed that Almighty God might turn the holy month into an occasion for health, prosperity, peace and calm among the nations.

The Turkish president also lauded Iran’s praiseworthy struggle against the coronavirus outbreak in spite of various problems, and called for efforts to ensure uninterrupted trade exchanges between Turkey and Iran in compliance with the health protocols.

Turkey has always opposed the US’ cruel sanctions against Iran and hopes that the international community would express a good state of resistance and confrontation in the current circumstances, President Erdogan noted, adding, “As two friends and brothers, Iran and Turkey will also get through these difficult days with cooperation and collaboration with each other.”

The Turkish president also proposed the idea of convening a summit of Iran, Turkey and Russia within the framework of the Astana process and holding a meeting of Iran-Turkey Cooperation Supreme Council via video conference, stressed the need for carrying out the trilateral agreements in the Astana format, and emphasized the necessity for the efforts to ensure ceasefire and sustainable peace and stability in the region.