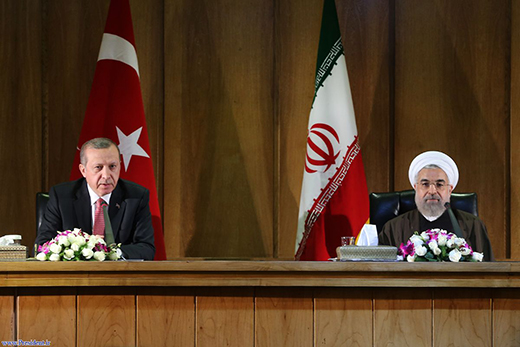 The Iranian president stated that Tehran and Ankara should boost bilateral efforts to tackle terrorism in the region.

Iran’s President Hassan Rouhani and his Turkish counterpart Recep Tayyip Erdogan have called for more joint efforts aimed at fighting terrorism and extremism in the Middle East, saying that the two countries share a common view on the issue.

“The two sides agree that instability, insecurity and war should stop in the entire region,” President Rouhani said in a joint press conference with the Turkish president in Tehran on Tuesday.

The Iranian president also stated that Tehran and Ankara should boost bilateral efforts to tackle terrorism in the region, saying, “Together, we should fight terrorism and extremism in order to achieve brotherhood between Muslims and people in the region.”

Heading a high-ranking delegation, Erdogan arrived in Tehran earlier in the day on an official one-day visit to hold talks with senior officials of the Islamic Republic. The Turkish president immediately started talks with Rouhani in Tehran’s Sadabad Complex.

Rouhani said he and Erdogan have held “detailed discussions” on the ongoing conflict in Yemen, adding that the two sides emphasized the need for an immediate ceasefire in the Arab country.

Rouhani said the establishment of such a ceasefire could pave the way for sending humanitarian aid to Yemen, adding that Iran and Turkey and other countries should help peace and stability be restored to the Arab country. The president expressed hope that in Yemen “an inclusive government is established through dialogue.”

After the meeting between Rouhani and Erdogan, the two presidents and their accompanying ministers attended a meeting of Iran-Turkey High Council of Economic Cooperation, which saw major agreements finalized between the two sides, including agreements on expansion of cooperation in energy, transportation and commerce sectors as well as the private sector investment.

The Iranian president said the two sides have also agreed to broaden their cultural and academic cooperation. Iran and Turkey will also work for tougher security along the border.

The Turkish president, for his part, said the two countries are determined to open a new chapter in bilateral relations, saying that the time has changed and Iran and Turkey should expand cooperation on various issues.

Iran and Turkey will from now take forward steps in mutual cooperation, Erdogan stated, adding that the two countries could become a role model for the other states in the region.

He further touched upon the current situation in Iraq and Syria, saying that Tehran and Ankara should cooperate on the issue as a matter of Islamic unity.

Erdogan emphasized the need for dialogue in order for the bloodshed in countries such as Iraq to stop.