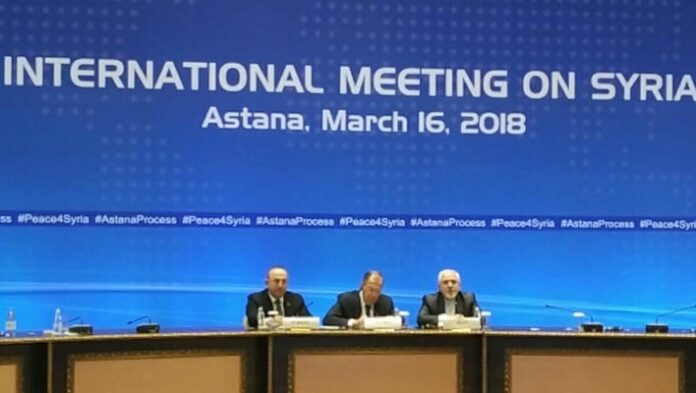 The foreign ministers of Iran, Turkey, and Russia, as guarantors of the observance of the ceasefire regime in Syria, gathered in the Kazakh capital on Friday to discuss the latest developments in the war-torn Arab country.

Iran’s Mohammad Javad Zarif, Turkey’s Mevlut Cavusoglu, and Russia’s Sergei Lavrov held the meeting to take stock of their trilateral cooperation since the first International Meeting on Syria in Astana held on 23-24 January 2017.

According to the joint statement released after the meeting, the three foreign ministers:

1. Highlighted the current high level of tripartite coordination on implementing the provisions of the Joint Statement by Presidents of Iran, Russia and Turkey of 22 November 2017 in Sochi;

2. Agreed to continue the effective interaction that would have positive effect on the situation in Syria and the entire region and reduce the risk of ethnic and sectarian divide;

3. Took note of the upcoming Trilateral Summit which would be held in Turkey on 4 April 2018; 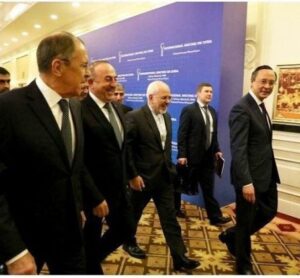 4. Expressed their satisfaction with concrete contribution of the Astana process to improvement of the situation in Syria during the last year, emphasizing in this regard the success of their collective efforts in the fight against international terrorism, particularly the defeat of ISIS in Syria and the creation of favorable conditions for the political settlement on the basis of the UN Security Council resolution 2254;

5. Emphasized that the Astana format and its achievements had become an effective instrument for contributing to peace and stability in Syria;

6. Expressed joint determination to continue their coordinated efforts with a view to ensuring that the progress in the reduction of violence on the ground was irreversible;

7. Reaffirmed their strong and continued commitment to the sovereignty, independence, unity and territorial integrity of the Syrian Arab Republic. They also highlighted that none of the actions, no matter by whom they were undertaken, should undermine these principles, confirmed by relevant UN resolutions and by the will of representatives of all segments of the Syrian society, clearly and unequivocally expressed during the Congress of the Syrian National Dialogue in Sochi;

8. Reiterated their conviction that there was no military solution to the Syrian conflict and welcomed the progress achieved in eight high-level meetings held in Astana with a view to contributing to international efforts for ending the Syrian conflict through the adoption of measures to reduce violence on the ground, build confidence between the conflicting parties, alleviate the humanitarian situation and give impetus to efforts aimed at finding a political solution;

10. Reaffirmed their determination to continue their cooperation in order to ultimately eliminate ISIS, Nusra Front and all other individuals, groups, undertakings and entities associated with Al-Qaeda or ISIS as designated by the UN Security Council in Syria and to prevent their relocation to other countries and regions;

11. Underscored the necessity to assist the Syrians in restoring the unity of their country and in achieving a political solution of the ongoing conflict through an inclusive, free, fair and transparent Syrian-led and Syrian-owned process leading to a constitution enjoying the support of the Syrian people, and free and fair elections with the participation of all eligible Syrians under appropriate UN supervision;

12. Welcomed the convening of the Syrian National Dialogue Congress in Sochi on 30 January 2018 as a major contribution giving momentum to the process of the political settlement under the UN auspices and reaffirmed their commitment to the results of the Sochi Congress, especially to form the Constitutional Committee and to facilitate the beginning of its work in Geneva with the assistance of the United Nations Secretary-General’s Special Envoy for Syria as soon as possible;

13. Called upon the representatives of the Government of the Syrian Arab Republic and the opposition committed to the sovereignty, independence, unity, territorial integrity and non-fractional character of Syria as well as the international community to support the work of the Constitutional Committee;

14. Underscored the need to ensure rapid, safe and unhindered humanitarian access to areas affected by the ongoing conflict;

16. Welcomed the UN Security Council resolution 2401 in response to the grave humanitarian situation all across Syria, including in Eastern Ghouta, Yarmouk, Foua and Kefraya, Idlib Governorate, Northern Hama Governorate, Rukhban and Raqqa;

17. Expressed their readiness to continue efforts with a view to implement the provisions of the above-mentioned resolution, aimed at strengthening the ceasefire regime and improving the humanitarian situation all across the Syrian Arab Republic, and called upon all parties to fully support this process, inter alia by sending additional humanitarian aid, facilitating humanitarian mine action, restoring basic infrastructure assets, including social and economic facilities, and preserving historical heritage;

18. Welcomed the convening of the first meeting of the Working Group on the release of detainees/abductees and handover of the bodies as well as the identification of missing persons on the eve of the Ministerial Meeting, and expressed their conviction that the efforts of the Working Group would further contribute to building confidence between the conflicting parties in Syria;

19. Expressed their sincere gratitude to the President of the Republic of Kazakhstan, His Excellency Nursultan Nazarbayev and the Kazakh authorities for supporting the Astana process and hosting International meetings on Syria;

20. Decided to hold the next high-level International Meeting on Syria in Astana in mid-May 2018.