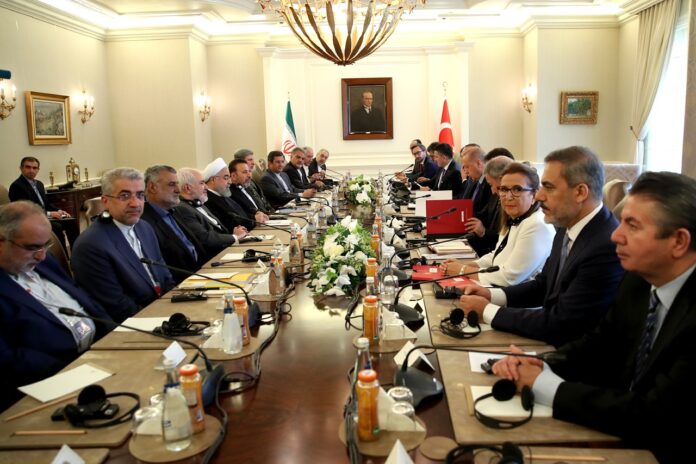 High-ranking delegations from Iran and Turkey have convened in Ankara to weigh plans for the expansion of economic and political relations between the two neighbors, including the use of national currencies to ease trade interaction.

The meeting of high-ranking delegations, co-chaired by President Hassan Rouhani and his Turkish counterpart Recep Tayyip Erdogan, was held in Ankara on Monday evening, ahead of a trilateral summit of Iran, Russian and Turkey on Syria peace efforts.
In the gathering, the two sides discussed the approaches to the implementation of bilateral agreements between Tehran and Ankara.
Hailing the “cordial and brotherly” ties between Iran and Turkey and the alliance of the two nations in all circumstance, President Rouhani praised Turkey for its clear stances on the US’ cruel sanctions against Iran.
“Despite the problems, Iran and Turkey will maintain economic relations in all fields,” he added.
Rouhani also emphasized that using the Iranian and Turkish currencies for bilateral trade will lead to a stride in their economic ties, noting that Iran welcomes the Turkish investors and private sector companies willing to carry out joint projects.
The Iranian president then touched on the mutual cooperation in the defense industry and the suitable grounds for cooperation and sharing experiences, noting that Iran and Turkey hold common views on the war against terrorism.
“The cooperation between Iran and Turkey for ensuring the security of common border and the region has continued, and will be enhanced,” he stated.
Rouhani also proposed that the cooperation among Iran, Turkey and Russia for ensuring regional security could grow into trilateral or even multilateral economic interaction among the neighbors and contribute to regional development and stability.
Iran feels duty-bound to ensure the security of regional maritime routes and attaches great significance to the security of the Persian Gulf, the Sea of Oman and the Strait of Hormuz, he added.
“Security of the region’s maritime routes must be ensured by the littoral states alone, and the presence of American forces and the invitations from the other countries asking them (the US) to come to the region will only add to the existing problems and tensions,” President Rouhani warned.
He further slammed the war on Yemen as a result of US miscalculation, adding, “We should all try to restore stability and calm to Yemen in collaboration with the United Nations.”
Rouhani finally pointed to the improved security in Syria after the cooperation among the three guarantors of the Astana Peace Process, urging that the supports for the Syrian government in the fight against the remaining terrorists in Idlib and east of the Euphrates should continue until terrorism will be uprooted in the Arab country.
For his part, the Turkish president said Ankara is determined to keep taking big strides in the expansion of the brotherly and friendly ties with Iran.
Lauding the remarkable rise in the trade ties between the two neighbors after the use of national currencies, Erdogan said, “The US sanctions against Iran are unconstructive, and from the Turkish government’s viewpoint, saving the JCPOA as the major symbol of success of dialogue and diplomacy has fundamental importance.”
He also said the Astana Peace Process and the tripartite agreements among Turkey, Iran and Russia prevented a “human tragedy” in different parts of Syria, expressing the hope that the Monday’s summit in Ankara would help stability and security prevail in the region, particularly in Idlib.
Iran, Russia and Turkey are guarantor countries that brokered a ceasefire in Syria in December 2016, leading to the Astana talks, which are running parallel to the Geneva peace talks.
The leaders of the three countries regularly meet for an assessment of the process which focused on Idlib and adjacent areas – the last stronghold of the rebels – and a political process which awaits the formation of a constitutional committee.