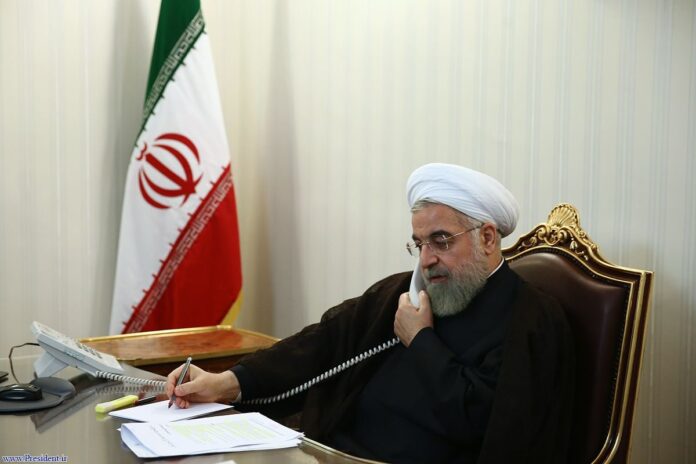 In the phone call, Rouhani described the Zionists’ assassination of Iranian scientist Mohsen Fakhrizadeh as a great and inhumane crime.

“Undoubtedly, this terrorist act shows the helplessness and inability of the sworn enemies of the Iranian nation against the scientific and research movements of our scientists and it is the right of the Iranian government to take revenge on the blood of this martyr from the perpetrators in the right time,” he said.

President Rouhani further expressed gratitude for Turkey’s expression of sympathy with the Iranian people and also its condemnation of the assassination, saying, “It is completely clear to us who was behind the assassination and what method it used.”

Rouhani stated that in the last months of his life, the Iranian scientist had spent most of his time finding ways to combat coronavirus and completing research to make diagnostic kits for the disease.

“The assassination of this scientist was a great crime and inhumane act,” he said.

Referring to the US President-elect’s remarks on the return of the United States to the JCPOA, the President said, “We have repeatedly emphasised that if the other parties to this agreement fulfill their obligations, we will fulfill our obligations as well.”

Pointing to the trend of cooperation between Iran and Turkey, Rouhani said, “Both countries are determined to develop economic and trade relations, but unfortunately the US sanctions prevented us from easily entering into trade and economic and banking cooperation between us.”
Rouhani also emphasised the development and deepening of relations with Turkey in all fields and the implementation of the agreements of the sixth meeting of the Supreme Council for Strategic Cooperation and the Joint Economic Commissions of the two countries.

The President also stressed the need for cooperation and unanimity between Iran and Turkey on international issues and said, “To prevent the infiltration of the enemies of Islam, repairing the gap in the Muslim world is an urgent need and Iran and Turkey can consult and work together to reduce the discords in the World of Islam and invite the Islamic Ummah to unity.”

Referring to the continued global crisis of coronavirus, Rouhani emphasised the participation and cooperation of the two countries in meeting medicine and medical equipment needs, as well as the exchange of experience in this regard.

Referring to the Nagorno-Karabakh crisis between Azerbaijan and Armenia, the President stressed the need to prevent the infiltration of terrorists in the region and the problems arising from it.

For his part, the President of Turkey expressed his condolences to the Iranian government, the people of Iran and the family of the Iranian scientist Mohsen Fakhrizadeh, and strongly condemned the terrorist act, saying, “There is no doubt that this terrorist act is aimed at undermining peace in the region.”

“I hope that the perpetrators of this crime will be identified and brought to justice as soon as possible,” said Recep Tayyip Erdoğan.

Referring to the new international situation and the beginning of a new era in the US government, the Turkish President said, “I hope that in the new US administration, the mentality of threats and sanctions will give way to dialogue, cooperation and interaction with countries.”

Erdoğan further stressed the need to further develop and deepen Iran-Turkey relations and stressed that the rapid implementation and operation of the resolutions and agreements of the Supreme Council for Strategic Cooperation will be closely followed.