Iran to Withdraw from JCPOA Stage by Stage: Araqchi 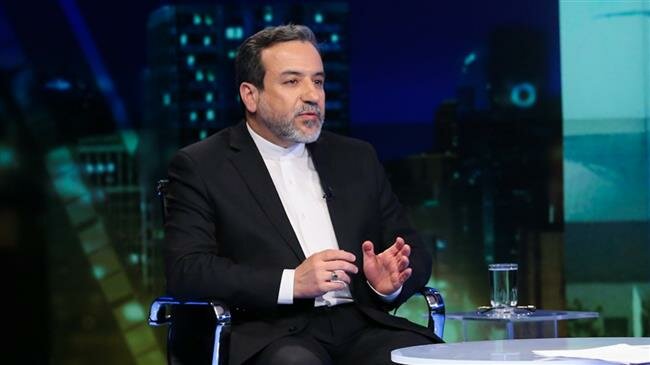 A senior Iranian diplomat says the Islamic Republic has put a "step-by-step" withdrawal from the 2015 nuclear deal, known as the Joint Comprehensive Plan of Action (JCPOA), on the agenda.

“We have not left the JCPOA so far, but we have put such a move on our agenda and that would happen step-by-step,” Iranian Deputy Foreign Minister for Political Affairs Abbas Araqchi said in an interview on Wednesday.

“No country can accuse Iran of breaching or leaving the nuclear deal,” the diplomat noted, adding that all the measures Tehran has adopted so far, including Wednesday’s move, has been within the deal’s framework.

The ambassadors of the countries remaining in the nuclear deal — France, Britain, Germany, Russia and China — on Wednesday received a letter penned by Iranian President Hassan Rouhani elaborating the suspension of some of Iran’s commitments under the accord, officially called the JCPOA.

The letter was handed over by Araqchi to the ambassadors of the five countries, who had been invited to the Foreign Ministry. The document specifies the details of the decision taken by Iran’s Supreme National Security Council, which is chaired by Rouhani himself.

The document says Tehran has exercised utmost self-restraint and patience since Washington’s exit from the deal last May, and has given the remaining signatories “considerable” time at their own request to compensate for Washington’s withdrawal and guarantee Iran’s interests.

Nevertheless, the other parties have failed to adopt any “practical measures” to blunt the impact of the economic sanctions that were re-imposed against Tehran by the US following its withdrawal, the statement said.

The Islamic Republic is thus entitled to restore the balance between its rights and obligations under the JCPOA, and has no option but to “reduce its commitments” within the framework of the deal, it added.

At the current stage, the statement said, Iran will no longer consider itself committed to the limits agreed under the deal on its stocks of enriched uranium and heavy water stocks.

Under the JCPOA, Iran is allowed to keep 300 kilograms of uranium enriched up to 3.67 percent. The deal requires Tehran to sell off any enriched uranium above the limit on international markets in return for natural uranium.

Tehran’s stock of heavy water is also restricted to 130 tonnes under the deal, which also calls for Iran’s excess heavy water to be sold to a foreign buyer.

The council has given Iran’s partners in the deal “60 days to meet their commitments, especially in the banking and oil sectors,” said the statement.

If they fail to address Iran’s concerns, Tehran will suspend the implementation of two more commitments under the JCPOA, according to the statement.

In the next stage, Tehran will no longer be bound by its commitment to enrich uranium up to 3.67 percent and will also begin developing its Arak heavy water reactor based on its pre-JCPOA plans, it added.