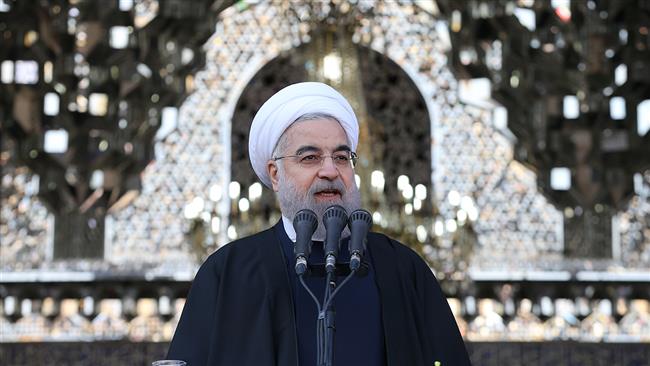 President Rouhani has said that the implementation of JCPOA in January will see all unjust resolutions against the Iranian nation terminated for good.

Iranian President Hassan Rouhani says the Islamic Republic is determined to make sure its nuclear agreement with P5+1 will come to fruition despite enemy attempts to sabotage the deal.

Rouhani said on Wednesday that Iran is now in the final stages of implementing the Joint Comprehensive Plan of Action (JCPOA) it clinched with P5+1 – the United States, Britain, France, China and Russia plus Germany – in Vienna on July 14.

“Despite the shameful dreams of American hawks, the Zionist regime (of Israel) and certain reactionary countries in the region that wanted JCPOA not to come into effect, our nation will help JCPOA bear fruits,” Rouhani said in an address to a large crowd of people in Rey, a Tehran suburb.

Under the agreement, Iran will accept restrictions on its nuclear program in return for the removal of sanctions imposed on Tehran by the US and the European Union.

Several US Republican lawmakers as well as the Israeli regime engaged in a host of activities, financial and otherwise, to torpedo the nuclear negotiations between the Islamic Republic and the six other countries that culminated in JCPOA as well as to undermine the accord itself.

Immediately after the signature of the deal, Israeli Prime Minister Benjamin Netanyahu launched a hostile campaign against JCPOA, calling it a “historic mistake.”

Referring to nuclear- related resolutions adopted by the United Nations Security Council (UNSC) and the Board of Governors of the International Atomic Energy Agency (IAEA) against Tehran, Rouhani said that all sanctions will be lifted on Iran in January.

“With the implementation of JCPOA in January all 18 unjust resolutions [imposed] against the Iranian nation will be terminated for good,” he said.

The Iranian nation will soon see the country’s economic gates open to the world, he said.