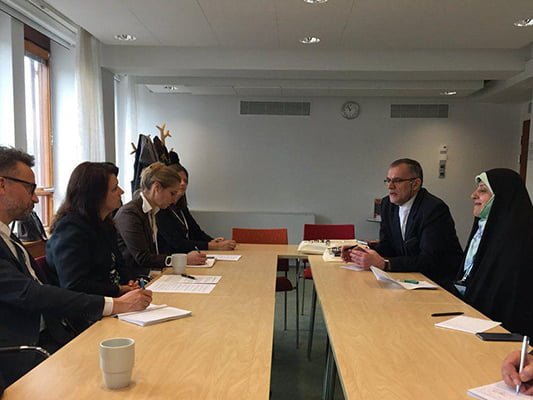 Iran’s Vice-President for Women and Family Affairs Massoumeh Ebtekar says women can play a leading role in the expansion of economic ties between Tehran and Stockholm.

In a Tuesday meeting with Ann Linde, Sweden’s Minister for European Union Affairs and Trade, Ebtekar said creating micro funds and corporations for women and sponsoring women’s entrepreneurship in tourism industry and handicrafts are among the major opportunities which can lead to further involvement of women in economy.

According to a Farsi report by IRNA, Ebtekar also called for expansion of ties between Iran and Sweden in all fields.

During the meeting held on the first day of Ebtekar’s two-day visit to Stockholm, the Iranian official also elaborated on the achievements gained in women’s affairs in Iran.

“Women’s increasing access to higher education in Iran and the growing number of female university graduates in the country have provided them with further opportunities to start specialized jobs,” she noted.

“We seek to pave the way for women’s greater involvement in economy by creating various economic opportunities for them especially in private sector and entrepreneurial field,” she noted.

Ebtekar also said women currently have a 30-percent share in managerial jobs and have witnessed a steady growth in their presence in decision-making positions.

Elsewhere in her remarks, the Iranian vice-president pointed to Tehran’s cooperation with Europe, particularly on the implementation of the Iran nuclear deal, saying that observing commitments under the JCPOA by all involved sides guarantees the world community’s peace and security.

The Swedish minister, for her part, referred to the last year’s visit of Swedish Prime Minister Stefan Lofven to Iran during which a number of agreements were signed between the two sides.

“The visit of Swedish prime minister to Iran reveals the importance that Sweden attaches to Iran in its international relations,” she added.

Linde also said the two sides have already signed a number of MoUs in women and family affairs adding these are good fields for expansion of ties.

She also referred to the Iran nuclear deal and underlined that her country is committed to the Joint Comprehensive Plan of Action.

Linde described Iran’s regional role as constructive and influential in the “chaotic region of the Middle East” and said based on a number of reports by the International Atomic Energy Agency, Iran has lived up to its  commitments under the JCPOA.

“It is now up to the international community to express its support for Iran.”

She also echoed the hope voiced earlier by the EU Foreign Policy Chief Federica Mogherini and said Sweden is eager to witness the opening of EU’s representative office in Iran.

Ebtekar is visiting Sweden at the official invitation of Swedish Deputy Prime Minister Margot Wallstrom as part of efforts to expand relations between the two sides and brief the Swedish side on Iranian women’s achievements.