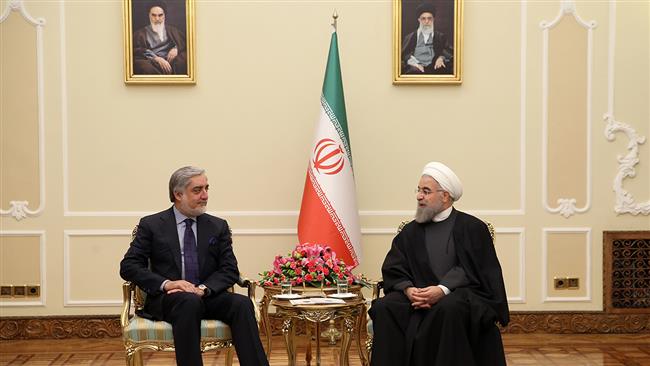 “The Islamic [Republic of] Iran favors a secure, stable and united Afghanistan,” Rouhani told the visiting Chief Executive of Afghanistan Abdullah Abdullah in Tehran on Tuesday.

Rouhani gave a positive assessment of the formation of national unity government in Afghanistan, saying it proves the “maturity” of Afghan political leaders who have paved the way for “unity and consensus among all ethnic Afghan groups.”

The Iranian president noted that security is the key requirement for Afghanistan and the entire region and expressed hope that unity in the country would result in further development of the Central Asian country.

He said that Iran’s policy is based on strengthening Tehran-Kabul ties.

“Iran welcomes the expansion of cooperation with Afghanistan particularly in the economic, cultural and environmental sectors,” said Rouhani.

He also said that the production and smuggling of narcotics poses a challenge whose tackling requires regional cooperation.

For his part, Abdullah heaped praise on the Islamic Republic for its all-embracing support for his country, saying the Iranian government and nation have always stood by the Afghan nation.

The Afghan chief executive expressed hope that the proper conditions would come about soon to facilitate the return of Afghan refugees living in Iran.

In a meeting with Abdullah earlier on Tuesday, Iranian Foreign Minister Mohammad Javad Zarif stressed the importance of drawing up a roadmap for bilateral cooperation in different fields including transit of goods, trade, security and legal issues.

He commended the Afghan government’s efforts to establish security and peace in the country within the framework of dialog among all ethnic Afghan groups.

Zarif and Abdullah also discussed the latest regional and international developments and ways to improve constructive cooperation in fighting terrorism and extremism.

Heading a high-ranking delegation, Abdullah arrived in Tehran on Monday for an official three-day visit.