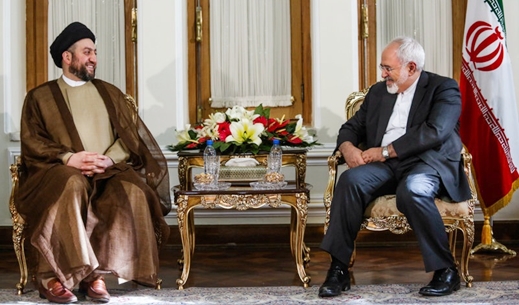 Iran always views expansion of Tehran-Baghdad ties as one of its priorities and supports the Iraqi government’s campaign against IS, said Zarif.

Iran’s Foreign Minister Mohammad Javad Zarif says the Islamic Republic throws its weight behind the Iraqi government’s fight against Daesh (an Arabic acronym for IS) terrorists.

“The Islamic Republic of Iran always views the expansion of Tehran-Baghdad ties as one of its priorities and supports the Iraqi government’s campaign against Daesh that aims to destabilize Iraq’s security and unity,” Zarif said in a meeting with Chairman of the Islamic Supreme Council of Iraq (ISCI) Ammar Hakim in Tehran on Tuesday.

Daesh’s heinous campaign of terror spread from Syria to the northern and western parts of Iraq in June 2014.

The militants have been committing heinous crimes against all ethnic and religious groups in Iraq, including Shias, Sunnis, Kurds, Christians and others.

The Iranian foreign minister further said during his recent visits to Lebanon and Syria, he had held consultation with senior Lebanese and Syrian officials to find solutions to the ongoing crises in the two countries.

Zarif traveled to the Lebanese capital of Beirut on August 11 before visiting Syria, Pakistan and India.

The Iranian minister also assessed as “constructive and useful” his talks with Russian officials in Moscow, which, he said, focused on support for Syria’s sovereignty, respect for Syrian people’s demands and finding reasonable solutions to the Syrian conflict.

He said Tehran and Moscow agreed that serious threats posed by Daesh’s growing extremism and anti-human violence should be prioritized in regional talks.

For his part, Hakim said Iraq has taken effective and major steps in the fight against Daesh, adding that cooperation between the Iraqi Army and popular forces has contributed to better security conditions in the country.

The ISCI chief said all Iraqi people, including Shiite and Sunni Muslims and Christians, have closed ranks in their efforts against Daesh threats.