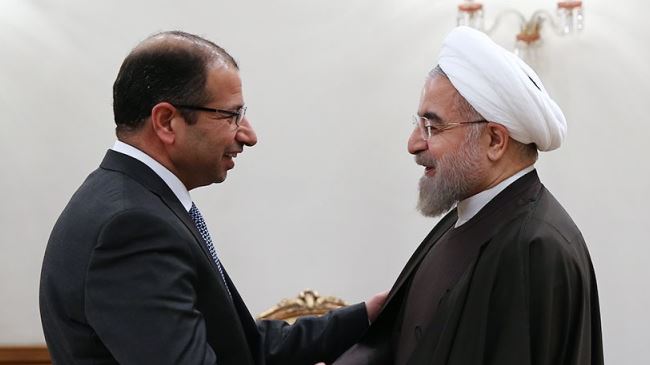 Iran’s President Hassan Rouhani says Tehran supports the fight against terrorism in all regions of Iraq.

“The Islamic Republic of Iran has always stood by all Iraqi people” regardless of their religious, sectarian and tribal affiliations and “supports unity, integrity, security and stability across Iraq,” President Rouhani said in a meeting with visiting Iraqi Parliament Speaker Salim al-Jabouri on Wednesday.

The Iranian nation is now standing by the Iraqi nation, Rouhani further stated, adding, “In every region of Iraq that [Iraqis] fight terrorists, we support the resistance of the Iraqi people and it makes no difference [to us] which tribe or sect is in the majority in that region.”

The Iranian president further noted that unity and integrity among the Iraqi tribes and sects have been cemented more than ever after terrorist attacks by the Takfiri ISIL militants.

Rouhani further lauded Iraq’s victories against the Takfiri militants, describing as “praiseworthy” the Iraqi nation and army’s resistance against terrorists and aggressors.

The Iranian president congratulated the Iraqi people and government on providing security for millions of people participating in Arba’een rituals in the country, describing the measure as a great “show of power”.

The Arba’een ceremony, which marks the 40th day after the anniversary of the martyrdom of Prophet Mohammad’s grandson, Imam Hossein, was held in Karbala on December 13.

The Iraqi official, for his part, stressed Iraq’s willingness to boost its relations with Iran, saying Baghdad and Tehran have numerous common interests and ties.

Key steps have been taken in Iraq today to cement unity in a bid to fight terrorism and the ISIL, Jabouri said, adding that terrorists will not be allowed to sow discord among the Iraqi people.

He stressed that terrorism poses a threat to the whole region, urging a collective effort to counter the scourge.

The ISIL militants currently control swathes of territory across Syria and Iraq. They have carried out heinous atrocities in both countries, including mass executions and beheadings of people.