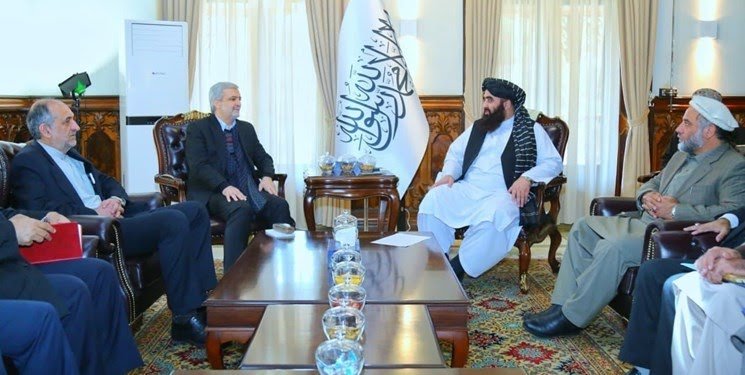 Iran's special envoy for Afghanistan has described talks between the two neighbors as constructive.

“We had positive and constructive talks with Afghan officials in different fields, including the economic sphere,” Hassan Kazemi Qomi said on Tuesday after discussions with Afghanistan’s Acting Minister of Foreign Affairs Amir Khan Muttaqi in Kabul.

Noting that Afghanistan is currently under foreign sanctions, the Iranian envoy said during the meeting, the Iranian and Afghan delegations agreed to pursue cooperation in the fields of agriculture, trade and fuel.

Kazemi Qomi said security issues were one of the important topics of discussion, noting that “Afghanistan is currently under pressure from the proxy terrorist groups of the occupiers who fled the country themselves but have continued the war through their proxy groups.”

He added that if stability and security is fully restored in Afghanistan, it will pave the way for construction and will lead to Afghanistan’s increasing regional and global interactions.

Kazemi Qomi said strengthening regional and international cooperation as well as the formation of an inclusive government in Afghanistan were also discussed in Kabul.

The acting Afghan foreign minister said for his part that Afghanistan wants good relations with Iran.

Iranian and Afghan delegations held good talks on different political and economic issues as well as refugee affairs and bilateral ties, he added.

“We hope that with the improvement of Afghanistan’s economic situation, bilateral relations will deepen,” the acting Afghan foreign minister stated.

The Iranian envoy arrived in Kabul on Monday at the head of a delegation for a 3-day visit.