“Iran Source of Serious Rift between US, Europe” 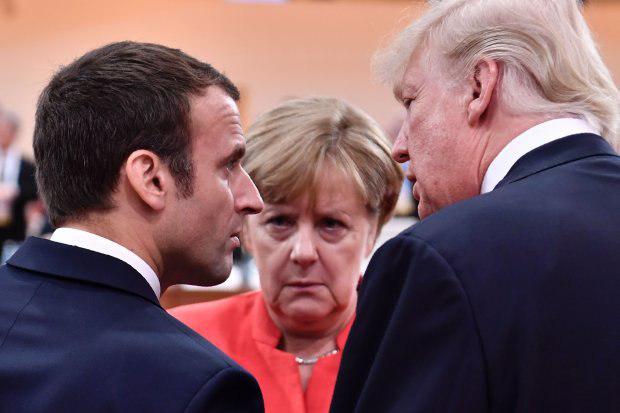 A political analyst says Iran and Europe are taking an important test at a time when US policies on the Iran nuclear deal have created a deep rift between Washington and European countries.

Abbas Sarvestani has, in an interview with Khabar Online, weighed in on the significance of Iranian President Hassan Rouhani’s trips to Switzerland and Austria at a time when Washington has unilaterally withdrawn from the Iran nuclear deal.

“In fact, the president’s visits are important from two perspectives: First, the trips to the two European countries follow the United States’ pullout from the JCPOA and come amid growing threats by Washington against Iran. Second, President Rouhani’s visits come at the invitation of his European counterparts,” he noted.

In part of his interview, Sarvestani has elaborated on the challenges which have emerged between the United States and Europe.

“The president’s trips to the two European countries, namely Austria and Switzerland, come at a time when the United States’ unilateral withdrawal from the JCPOA and many other international treaties and organizations as well as the outbreak of a tariff war has caused the biggest rift ever between Europe and the US since the end of the Cold War era. This could be regarded as an important event which will have considerable effects on political equations in the region and across the world,” said the analyst.

“Despite efforts by the US and the Arab-Hebrew-Western Axis to isolate the Islamic Republic of Iran and also the White House’s pullout from the JCPOA, Rouhani’s trips to these two countries, given their important role and position in the world and in the European Union, can be seen as a positive step towards [boosting] Iran-Europe ties. Moreover, the positive image of these two countries because of their policy of neutrality and hosting key international institutions and especially talks on the JCPOA can play a positive role in bilateral relations as well as in Tehran’s ties with the EU. Such an event will consolidate the Islamic Republic of Iran’s logical stance on multilateralism in the international system and the necessity of respecting international agreements,” said the expert.

The analyst believes the stability of the Middle East and preventing migration are Austria’s top priority. He says other priorities for Austria during its rotating presidency of the EU are issues such as the Brexit, the EU’s ties with Russia, and the recent developments in transatlantic relations. The analyst believes the JCPOA is undoubtedly one of the key challenges in the domain of transatlantic relations, and one of the top priorities of the EU will be to preserve the JCPOA due to different security and migration reasons.

Sarvestani believes the United States’ withdrawal from the JCPOA was Washington’s second mistake after its unilateral invasion of Iraq during which the US jeopardized the European Union’s security and trade interests because of adopting the strategy of unilateralism. In other words, to EU officials and elite, the JCPOA is reminiscent of Washington’s unilateral attack on Iraq with subsequent trade and security costs for the EU.

The analyst also reiterated that the JCPOA has created uncertainty and raised the question of whether the EU will remain a political dwarf or it has gained the ability to look after its citizens and has what it takes to stand up to the disastrous and costly decisions made by the US for the European continent. It seems the US withdrawal from the JCPOA and the declaration of a trade war with the EU has turned into a call for the awakening of the continent and the stabilization of values and principles that have shaped the EU’s distinct foreign policy over the past six decades.

Therefore, it seems that the European Union, having learned a lesson form its past mistakes, will adopt a firm position against Trump in order to prevent the emergence of another crisis in the Middle East.

The analyst touched upon the EU’s efforts to preserve the JCPOA and stressed that the EU believes the only way to maintain the nuclear deal is through securing Iran’s national interests.

“By adopting a single strategy led by France, Germany and Britain, and with the cooperation of China and Russia, the European Union seeks to offer an acceptable package to preserve the JCPOA and keep the Islamic Republic of Iran in the deal,” said the analyst.

He said the key challenge to the maintenance of the nuclear deal is the issue of secondary sanctions and the penalties imposed on non-American companies.

“Given some private companies’ failure to align themselves with the policy of blocking the bans, concerns over secondary sanctions and the importance of oil sales for our country, it is predicted that the policy of blocking and opposing the sanctions will be mostly implemented in the domain of oil trade. To that end, European countries will keep importing oil from Iran,” he said.

The analyst underlined the undeniable importance of the JCPOA for Iran and Europe, and said the current situation is a test to measure how much effort the P4+1 group has put into preserving the nuclear deal.

“It is an important test for the European Union in that it has an opportunity to expand Europe’s influence in the world and to oppose the United States’ unilateral decisions. For the Islamic Republic of Iran, it is a test to stabilize its fundamental and logical positions based on international norms and also to isolate the US in the domain of the international system,” he said.

He said the United States is a country which seeks to push Iran towards nuclear activities in order to inflict the cost of Washington’s withdrawal from the JCPOA on Tehran.

The analyst underlined that the solutions put forward by the Iranian president are the best strategy for the country’s foreign policy.

“The most appropriate mechanisms which exist in our country’s foreign policy domain are constructive talks and engagement with the European countries opposing unilateralism such as Switzerland and Austria as well countries which are influential on the international stage, the maintenance of the JCPOA, respect for international agreements, and the adoption of a policy of patience vis-à-vis the US and Washington’s regional allies. So, Rouhani’s trip could be a step towards normalizing the condition of Tehran’s foreign policy during the era following Washington’s withdrawal from the JCPOA and lay the groundwork for working out a diplomatic solution,” he said.