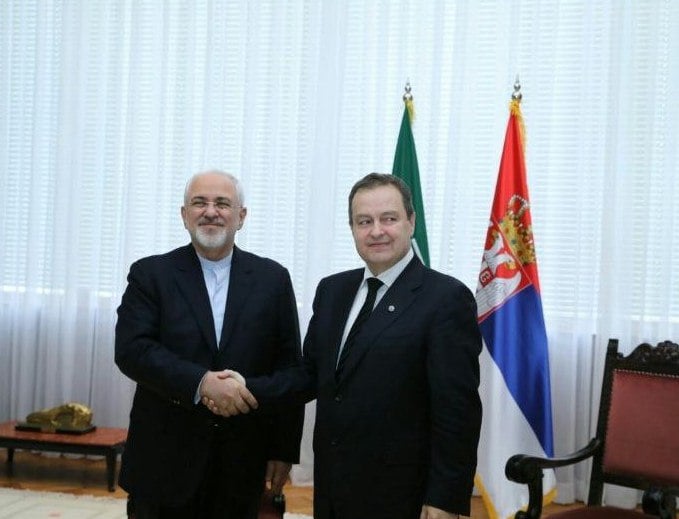 During the Monday meeting, which was held right after the Iranian FM’s arrival in the Eastern European country, the two sides discussed the ways of expanding bilateral relations in all fields.

At the beginning of the meeting, the Serbian official, who is also the deputy prime minister of the country, welcomed his Iranian counterpart and expressed Belgrade’s readiness to expand ties with Tehran in all areas.

“I’m glad to hear that a delegation of Iranian businessmen, who can expand the economic and commercial relations of the two countries, are accompanying you,” said Dačić.

FM Zarif in turn expressed his pleasure with being in Serbia adding that the Islamic Republic intends to expand mutual ties in all political, economic, cultural, and parliamentary spheres.

Zarif also said that, on behalf of Iran’s President Hassan Rouhani, he will invite the Serbian President to travel to Tehran.

The Iranian foreign minister further welcomed the idea of abolishing visa regime for the two countries’ citizens stressing that if a direct flight is launched between the two countries, business ties and relations among the people of Iran and Serbia will increase dramatically.

Zarif also referred to the fields of oil, gas, petrochemicals, mines, communications, agriculture and other infrastructures as suitable grounds for cooperation between the two states.

Cooperation in defence, science, technology as well as cultural, artistic and academic collaborations were among other areas discussed by the two officials.

Exchange of views on regional and international developments were on the agenda as well.

The two top diplomats also attended a luncheon organized in honour of the foreign minister of the Islamic Republic of Iran following behind-the-doors negotiations.